Project: Whisper is the name given to the development of an experimental helicopter designed to be quiet in flight and undetectable by means of radar. The helicopter is designed for multiple roles, as it is shown to be able to carry personnel and equipment, or stockpiles of weapons and ammunition for an all-out attack. It is mounted with three MG-60s, capable of delivering very heavy fire. Two are mounted on the sides, and one on the bottom. They can be seen in action in various points during the storyline, notably on the Gibraltar Bridge mission in The New Order, and after the fight with Lothar, shooting down a Horten Ho 229 in Youngblood. The Nazis were successful in creating three VTOL-like helicopters that were capable of such a thing. The three working prototypes were placed within the London Nautica and were kept under heavy guard by means of both Soldiers, Guard Robots and Heavy Robots of the Nazi regime.

A variant of the Project Whisper was used by Caroline and Anya to evacuate the prisoners from Deathshead's Compound. It features coaxial rotor design and was armed with HMGs and rocket pods. BJ encounters one such helicopters when returning to London Nautica. It only engages him with its frontal HMGs.

They are also equipped with jet engines to increase their speed and maneuverability.

After the liberation of the United States, the existing helicopter design was reverse-engineered, refined, and mass-produced to an unknown extent by the re-established American government. At least two of these vehicles were in use by the FBI as of the 1980s.

Project Whisper Helicopter in the hangar of the Eva;s Hammer. with Max Hass's drawing. 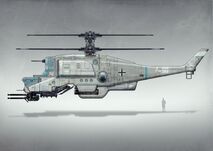 A variant of the Project Whisper. Used by Caroline and Anya and encountered by BJ

In New Colossus
Community content is available under CC-BY-SA unless otherwise noted.
Advertisement