Wolfenstein Wiki
Register
Don't have an account?
Sign In
Advertisement
in: Robots, The New Order enemies, Bosses,
and 6 more

"Can you grasp the splendor of it? The intelligence of the human brain amalgamated with the efficiency and obedience of the machine. Machine Man. Clear the room."
―Deathshead speaking to B.J. Blazkowicz and the Prototype Robot.[src]

The Prototype Robot (German: Prototype-Roboter), also called "Machine Man (German: Maschinenmensch)" by Deathshead, is the penultimate boss of Wolfenstein: The New Order. It is operated by the disembodied brain of either Probst Wyatt or Fergus Reid, depending on who B.J. Blazkowicz chose for Deathshead to vivisect at the end of the intro level.

After the reveal, it will steal the player's weapons, and equip itself with the LKW. During the fight, it must be defeated using the Tesla grenades found in the nearby crates to temporarily disable it, allowing Blazkowicz time to remove the brain from the robot. Following the battle, Wyatt/Fergus apologizes to Blazkowicz for attacking him and asks Blazkowicz to kill him. Blazkowicz tearfully obliges his request by destroying his brain, ending his suffering.

On higher difficulties, this boss can jump while throwing grenades on him, making the fight harder. 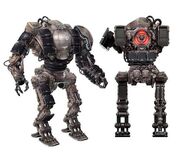 The Prototype Robot after B.J. removed the brain of Fergus/Wyatt 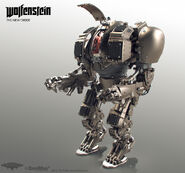 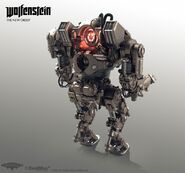