The Radio Tower, It is a side-mission that located in the Downtown. Unlike any of the are going to another level to complete. Also, It will automatically given the money directly rather then complete everything. This is the only side-mission in Downtown.

Right after completely the Castle Mission. A cut-scene appeared near of the stairway, Where two of the SS Soldiers settling the Black-Sun Energy of Radio Tower directly to the Sky. Possibility to the Zeppelin directly order by the Deathshead for the weapon to reach into full power to destroy Isenstadt. After that an agent from Kreisau Circle asking B.J. Blazkowicz by Saboteur using the C4 Plastic Explosion planting them at below of their tower right. It did it, he tell him to go the Eastward of the downtown where the station and destroy the station to cut off the energy channeling to the airship.

Destroying any of the tower will give you five hundred dollar.

There are total eight Gold, four Intel and one tome found in this mission.

On the roof of the station there are a stockpile of ammunition for Panzerschreck, Blazkowicz is supposed to destroy the shield door's power sourse across the street by such weapon, however Leichenfaust 44, Kar98 and MP 43 (with Empower) can do the same.

Radio Tower Introducing by one of the Kreisau Circle Agent.

Another Tower that is located near the Black Market.

Radio Station on top of the Roof.

Inside the Radio Station.

Outside of the Radio Station Entrance location is locate Eastward of the Downtown. 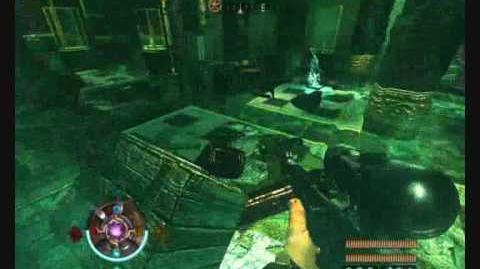