Edit
watch 01:09
What is Return to Castle Wolfenstein?
Do you like this video?
Play Sound

Wolfenstein has other meanings. See Wolfenstein (disambiguation) for other uses.

Return to Castle Wolfenstein, often abbreviated RtCW, is an entry in the Wolfenstein series released November 19, 2001. The game was published by Activision, developed by Gray Matter Studios and Nerve Software. Id Software oversaw the game's development and was credited as the game's executive producers. The game was the long awaited re-imagining of the video game Wolfenstein 3D but actually, the game restarted the franchise. It would be followed by the 2009 sequel Wolfenstein.

In 943 AD, a German prince known as Heinrich dominated Western Europe with his army of undead and Dark Knights created by black magic. There was no one who could stand in his way - until a monk stopped Heinrich by sealing him in a deep underground tomb.

A thousand years later, in 1943 AD, the Second World War had started to go bad for Nazi Germany due to their defeats on the Eastern Front and in North Africa. The Chief of the Nazi SS, Heinrich Himmler, had been researching possible ways to win the war through science and black magic and read a few stories about the German prince Heinrich I and his Dark Knights, becoming interested in them, especially since they were so powerful. Heinrich Himmler believed that if he could bring Heinrich back to life, he could win the war for Nazi Germany. Himmler then founded an SS Paranormal Division and sent them to Northern Egypt in secret and hoped that they would find some ancient tablets.

Meanwhile, the Allied intelligence office got word of this and sent British Agent One and US Army Captain B.J. Blazkowicz to capture Helga von Bulow, a high ranking member of the SS Paranormal Division. They tracked Helga to an ancient tomb filled with the undead, but both the agents and the Germans escaped, including Helga. After this on March 15, 1943, Blazkowicz and Agent One were sent to follow her to Castle Wolfenstein, but were shot down by the Luftwaffe along the way and captured by the Germans.

While investigating the activities of the SS Paranormal Division in Germany, B.J. Blazkowicz and Agent One are captured by the Nazis. Agent One dies while being interrogated by a Nazi interrogator, but B.J. manages to escape Castle Wolfenstein's dungeon. He then finds a way out of the castle, fighting through platoons of guards, and ultimately using a tram car to leave the area and meet up with a member of the German resistance in a nearby village.

The SS Paranormal Division under Oberführer Helga von Bulow has been excavating the catacombs and crypts of an ancient church within the village. Their sloppy precautions have led to the awakening of hordes of undead creatures, including Saxon knights, and the entrance had to be sealed off with many soldiers trapped inside. B.J. descends regardless and fights both Nazis and Undead until he arrives at the ancient "Defiled Church" where Nazi scientist Professor Zemph is conducting an experiment on the corpse of a Dark Knight. Shortly before B.J.'s arrival, Zemph tries to talk Helga von Bulow out of retrieving an ancient dagger, but she shoots him impatiently and proceeds. This awakens an undead monster known as Olaric who kills her too. Blazkowicz fights the monster and is airlifted out, with Zemph's notes.

One of Germany's leading scientific researchers and Head of the SS "Special Projects Division", Wilhelm Strasse, (known as "Deathshead"), has prepared to launch an attack on London using a V-2 rocket fitted with an experimental germ warhead from his base near Katamarunde in the Baltics. Blazkowicz is parachuted some distance from the missile base and smuggles himself into the base in a supply truck. Inside the base, Blazkowicz destroys the V-2 rocket on its launchpad and fights his way out of the facility towards an airbase filled with experimental jet aircraft, destroying a huge radar in the process. After fighting his way through the airbase, he commandeers a "Kobra" rocket-plane and flies to safety in Malta.

Eager to know more about Deathshead and his secret projects, the OSA sends Blazkowicz to the bombed city of Kugelstadt (which, translated from German, literally means 'Bullet City'), where he is assisted by members of the German resistance in breaking into a ruined factory. There he discovers the blueprints for the Reich's latest weapon, an electrical machine-gun called "Venom Gun". Blazkowicz eventually breaks into Deathshead's underground research complex, the Secret Weapons Facility (SWF). There he encounters horrific creatures, malformed and twisted through surgery and mechanical implants. The creatures have just escaped and gone on a rampage. Blazkowicz sees Deathshead escape the SWF by U-Boat, and learns of its destination by interrogating a captured German officer.

Blazkowicz is parachuted into Norway, close to Deathshead's mysterious "X-Labs". After breaking in, he sees several of the twisted creatures (deemed "Lopers") he encountered in Kugelstadt released from their cages and immediately turn on the laboratory's staff. Fighting his way through the facility, Blazkowicz retrieves Deathshead's journal and confronts several prototype Ubersoldaten, towering monstrosities coated in armor, powered by hydraulic legs, and carrying powerful fixed weapons. Finally, he confronts and destroys one of Deathshead's ultimate Übersoldaten and kills the researchers who have developed it. Deathshead himself escapes in a rocket-plane and does not appear in the game again.

After studying the documents captured by Blazkowicz, the OSA has become aware of a scheme codenamed "Operation: Resurrection", a plan to resurrect Heinrich I. Despite the skepticism of senior Allied commanders, the OSA parachutes Blazkowicz into the Harz mountains of Germany, close to Castle Wolfenstein itself. He arrives at the village of Paderborn and, after assassinating several senior officers of the SS Paranormal Division including Major Hochstedder, General Von Struasse, Colonel (Oberst) Strache, General Burkhalter and General Haupman, fights his way into Chateau Schufstaffel, where he encounters members of the Elite Guard including the main leader General Von Shurber. Blazkowicz then fights his way through the grounds of the chateau, facing opposition from members of the Elite Guard and two of Deathshead's Übersoldaten. Having destroyed the mechanical soldiers, Blazkowicz enters an excavation site near Castle Wolfenstein.

Inside the excavation site, Blazkowicz fights Nazi guards and prototype Übersoldaten, and makes his way to a boarded-up entrance to Castle Wolfenstein's crypts. There, he finds that the ruined part of the castle has become infested by undead creatures, which are attacking the castle's desperate garrison. After fighting his way through the castle, Blazkowicz arrives at the site of a dark ceremony to resurrect Heinrich I. At the ceremony, SS Psychic Marianna Blavatsky conjures up dark spirits, which transform three Übersoldaten into Dark Knights, Heinrich's lieutenants. She ultimately raises Heinrich I, who "thanks" her by turning her into his undead slave. In a climactic battle, Blazkowicz destroys the three Dark Knights and Heinrich I as SS chief Heinrich Himmler watches in horror from afar, and later on he returns to Berlin to report his failure to Adolf Hitler.

At the very end of the game, the OSA director and Jack are seen discussing about how B.J should receive a medal for defeating Heinrich I. The Director then asks where B.J is now, and the scene shows him engaging a number of Nazis near a ruined factory, once again on the frontlines.

The multiplayer part of the game consists of two teams (Allies and Axis) fighting each other to complete objectives on various maps. Most maps have the Allied team attacking and the Axis team defending. During matches the players can play as different classes. Each class has a different role and teamwork is needed to be victorious. The Soldier class can use heavy weapons and has the most health. Only the Engineer class can demolish objectives, but they can also disarm enemy dynamites. Medics can keep their teammates in fighting form, and revive fallen players. Lieutenants can use their binoculars to call in artillery strikes on enemy positions, and they can give ammo to teammates.

The game was released for the Linux and Macintosh platforms in 2002. In 2003, the game was ported to the PlayStation 2 and Xbox and subtitled as Operation Resurrection and Tides of War, respectively. Both console versions include a series of prequel single player missions where the main character, B.J. Blazkowicz and his partner Agent One operate in Nazi-occupied Egypt, in North Africa. The missions in console ports are slightly different from the PC version (as they were created after the PC release and have somewhat bigger locations and more content), and in the PS2 version some missions were divided and separated as different levels (but with the same name). The PS2 version allows for purchasing upgrades such as increasing ammo capacity or maximum health by finding secrets at the end of each level. In the Xbox version a Secret Bonus is awarded after every level when all the secret areas for that level have been found. It also has a new Shotgun weapon found in singleplayer as well as the Soldier and Engineer for multiplayer mode. New special equipment include the Holy Cross, EMP Device, and X-Shield. New enemies being Egyptian mercenaries, Occult Priests and X-Shepherds. The original Wolf 3D also comes included. The two player co-op mode is exclusive to Xbox and allows the second player to play as Agent One. The Xbox version has the addition of online play via Xbox Live and link play. It also has downloadable content. Xbox has also released a Platinum Hits edition of the game. The Playstation 2 version lacks any online play whatsoever.

Operation Resurrection and Tides of War[]

This mission shows what B.J. and Agent One did prior to their capture. While fighting Erwin Rommel's forces in North Africa, B.J. suddenly finds himself assigned to a secret mission in the town of Ras el-Hadid in Egypt. Accompanied by Agent One, he makes his way through the town and infiltrates a secret archaeological dig site where Helga Von Bulow and her SS Paranormal Division are attempting to acquire a pair of ancient magical tablets from a cursed tomb. After fighting his way through both Nazis and Undead, B.J. makes it through the tomb but ultimately fails to capture Helga. He and Agent One pursue her in a stolen Ju-52 transport, only to be shot down by the Luftwaffe near Castle Wolfenstein, where they are captured.

After Id Software released the game received acclaimed reviews for the next generation enhanced graphics and game-play that defined it as the modern shooter. 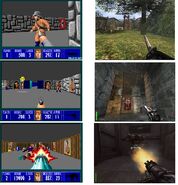 The 3 weapons from Wolf3d and the same in RtCW (Knife, Pistol/Luger and Chaingun/Venom)