Wolfenstein Wiki
Register
Don't have an account?
Sign In
Advertisement
in: Nazi Soldier, The New Order enemies, Stub,
and 4 more

Rocket Troopers (German: Raketensoldaten) are new enemies who appear in Wolfenstein:The New Order. They are like the Fire Trooper heavily armored and heavily armed. They are first encountered in Chapter 8 during the segment where Blazkowicz is piloting Herr Faust.

They are heavily armored elite infantry units that carry the Assault Rifle 1960 with an under slung rocket launcher attachment.

Rocket Troopers will constantly fire rockets at long ranges, but at closer ranges, they will fire their assault rifles.

While heavily armed and armored, Rocket Troopers are vulnerable to heavy weapons. A direct rocket hit can take them out in one blow although in some cases 2 rocket hits are needed. The rockets are easily dodged as long as the player has the Rocket Trooper in sight; keep a distance from them because the bullets are much harder to avoid than rockets. The rocket has a small blast radius, players will take little or no damage even if the rocket strikes near their location; a direct hit however, will severely wound them, and sometimes knock them back. That might cause trouble for the players as Rocket Troopers never fight alone; there are always standard soldiers or even heavy robotic enemies fighting among them. If the Rocket Trooper is far enough, dispatch other threats first, find cover to avoid fired rockets or visual contact with them.

At the Uber difficulty level, Rocket Troopers can absorb a tremendous amount of firepower from non-explosive weaponry, but are highly susceptible to sustained fire from the AR Marksman's secondary fire function (i.e., from its automatic plasma rifle function). At lower difficulties, Rocket Troopers are still very durable, they will take a lot of rounds from conventional weapons or energy-based weapons before going down, they are immune from the stunning effect of Tesla Grenade. If the player is low on rockets to counter them, upgraded Laserkraftwerk is a good alternative option.

Advantages against the player[]

Disadvantages against the player[] 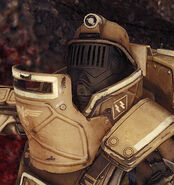