Wolfenstein Wiki
Register
Don't have an account?
Sign In
Advertisement
in: Nazis, Wolfenstein II: The New Colossus, Traitors of Country,
and 10 more

Note: The following character appears only in the Freedom Chronicles which exist as works of fiction within the Wolfenstein setting; their existence and the veracity of events involving them in the actual timeline is questionable at best.

K.I.A.: Tackled out a window by Gunslinger Joe, fell to his death.

Episode Zero (Intro Only)
The Adventures of Gunslinger Joe

"This is what they call poetic justice, Joe. You could have had a decent life taking a dive on the field for the Reich. Now look at you. A limp dishrag groveling on the floor. Before I shoot your brains out, any last words? {...} The Sonnengewehr? Oh, that's not operational yet. Are those your final words, slave?"
―Roderick Metze to Gunslinger Joe before his death.[src]

Übercommander Roderick Metze is the main antagonist of the Wolfenstein II: The New Colossus DLC The Adventures of Gunslinger Joe. A Nazi collaborator, he is involved with the Sonnengewehr project.

Metze was born to a family with ancestors who sided with the Confederate States during the Civil War and had a hate-mongering, preacher father who worked as a Grand Dragon in the KKK. When he was young, he asked his father how he knew Whites were better than Negroes, with his father replying that he (and all other white folk) were ordained to commune with God.

Before the occupation of the US, Roderick Metze was an American dentist with extremely unpleasant reputation. When the Nazis occupied America, Metze became a collaborator, attaining such a high rank that he was promoted to Übercommander within a decade, and the only American to do so. When an African-American named Stallion formed a resistance group, Metze ordered his arrest and sent him to the Hillsboro mine to work till he 'croaked'. Unbeknownst to Metze, he did this in front of the man's son, Joseph would become his enemy later in life. Himself an athlete, goal is to find the secret in the genetic material of exceptional American athletes to create a perfect super sportsman for the regime - however, it was more likely a twisted pet project, as it was was considered a waste of time and resources by the Nazis.

Metze was part of the German superteam and on March 12, 1950, he scored his fourth touchdown, winning the game. However, Gunslinger Joe scored one point for his team and was eventually captured with resistance members.

It is believed that Metze worked along with Übercommander Michael Rademaker in 1959 to organize a bombing campaign that flushed out the resistance in Springfield, allowing the capture of sixteen members, and the deaths of several others.

In The Adventures of Gunslinger Joe, Roderick Metze and the Nazis try to prove the superiority of the Aryan race through American football by organizing football games in the Überbowl. The games have the Aryan All Stars team versus the Üntermensch team, who are forced to lose every game to promote Aryan superiority. An African American slave named Joseph Stallion (Gunslinger Joe), a former professional athlete and football quarterback attempts to break the rules and score, only for Metze to shoot the ball before it reaches the goal post. Metze and his men arrest Joe, and send him to the coal mines.

However, Metze recognizes Joe, having arrested his father years ago, and instead has Joe sent to Research Station Omega. Metze underestimates Joe's remarkable body structure and his raw strength, and Stallion breaks free, now seeking revenge on Metze. However, as Joe arrives at the resistance hideout, he runs into Metze and his men. Due to his extreme arrogance, Metze decides Joe is not worthy to be killed by his hand because he was a African American and orders his men to kill him, but Joe escapes by tackling a soldier out a window.

When Joe goes on a rampage in the Secret Police Headquarters, Metze tells him through the speakers that he was surprised a slave like Joe was a problem for him, and gives him his father back as a gift, who he found broken in the bottom of the Hillboros coal mine. But Metze, not wanting to be humiliated by Joe, also leaves a bomb as a deathtrap. Due to the police headquarters going up in flames with no found survivors, Metze now believes that Joe has perished. However, Joe carefully removed the bomb, managing to get away, and vowed to hunt down and kill Metze.

Later Joe finds out Metze intended to fire a super weapon known as the Sun Gun at the American Midwest. Metze's plan is to coordinate the attack from Venus to suppress the rising activities of the American Resistance. Joe, realizing the stakes being now much higher, stowaways on a rocket headed for Venus. Metze could only watch as Joe kills nearly all of his guards at the Venus base. When Joe heads for the control room where he expected to find Metze, Metze throws a surprise attack on Joe from his side and shoots him. Unable to learn from his mistakes for underestimating Joe previously, Metze foolishly brags to Joe that this will be poetic justice. But before killing Joe, he asked him if he has any last words. Joe asks him why he hasn't fired the sun gun yet, and Metze tells him that it's not fully operational yet. Metze mockingly asks if those are really his last words, to which Joe says 'No', and quickly tackles Metze out a window behind him, causing Metze to fall to his death.

"Enter Übercommander Roderick Metze. I had heard stories about him. Stories from his dentist years. Stories that would make your heart race like a horse."
―Joe on Metze.[src]

Even compared to other Nazis, Metze was twisted and sadistic. He would conduct inhumane and brutal experiments on prisoners, to the extent that even his subordinates began to grow uncomfortable. A group of irate Nazi officers originally planned to isolate Metze on Venus, but ultimately allowed Gunslinger Joe to solve their problem by pulling away their least valuable soldiers from his path of vengeance and permitting him to reach Venus. Metze was very proud of his family's supremacist history, and gladly accepted the Nazi occupation of America. He highly underestimated Joe due to him being an African-American and was incapable of taking him seriously, which proved to be his undoing. In addition, Metze showed himself to be cowardly through each volume, constantly leaving his fate to others in every volume, until forced to ambush him personally.

Metze is shown to have superb marksmanship skills, deftly shooting out a football in mid-air before Joe could score, and nearly kills Joe by cuffing him and shooting him in the stomach.

He also follows the in-game trend of American collaborators being poor speakers of German, and consistently mispronounces 'Reich'.

"Arrest that man! And throw him into the coal mine {...} Wait. He might still be of use to the Reich. In parts, that is! Enough. Take him to Research Station Omega!"
―Metze's first words.[src]

"Joe! You almost missed your appointment. The doctor will see you now."
―Metze holding Joe at gunpoint.[src]

"I'll tell you why. My ancestors were humiliated during the Civil War. I am the fruit of their humiliation. When the Germans came, I knew they were bringing justice and order for the white man. And now, here you are. A slave to the Reich. Order has been restored and so has my ancestors' honor. Anything to say, before I seal your fate - slave?"
―Metze explaining to Joe on why he joined the Nazis.[src]

"No, you know what? I'm not going to dirty my hands with this subhuman. I'm not even going to spare him a second thought."
―Metze at the end of Volume 1.[src]

"Everyone, this is...disgraceful, frankly. Did you actually fail to contain a stupid football player? This man made a mockery of the Reich. I expect Gunslinger Joe in shackles by my feet. Now!"
―Metze to his men on letting Joe beat them.[src]

"My fellow Americans. This is Übercommander Roderick Metze speaking. As a dentist, I know the value of helping people. You can all rest easy now. The infamous Joseph Stallion, a.k.a. Gunslinger Joe, has been executed for treason. Good riddance to these terrorists with their lies about the "resistance". They are rotting teeth that need to be pulled out. They just want to murder innocent people like you trying to live in peace. Trust me, I'm a real American just like you. And I know that our destiny is to serve the Führer. We are part of the Greater Reich now. Be a patriot. Fulfill your destiny. For the future of our race."
―Metze's speech in Springfield.[src]

"Hey, Joe. Say hi to the surveillance cameras. You really embarrassed me in front of the Oberkommando, Joe. I told them you were dead. Dead! A slave embarrassing an Überkommandant of the Reich? Embarrassment, Joe. There is nothing I hate more, than being caught with my pants down. So I found an old friend of yours, deep in a coal mine outside of Hillsboro. He's waiting for you in the room at the end of the hall. Consider this my gift to you, Joe. See you around, "Gunslinger"."
―Metze to Joe who is at the Secret Police HQ[src]

"I thought you were dead, Joe. Persistent. Just like your worthless father slaving away down in those awful Hillsboro mines. And look where his persistence got him. Six feet under."
―Metze taunting Joe in Volume 3.[src]

"My father was a preacher, Joe. And a night, a Grand Dragon of the Ku Klux Klan. I remember asking him once, "Father, how do you know white folks are better than Negroes?" He said, "Use the gray goop in that little head of yours, son. I am ordained to commune with God." You see, Joe? God is on our side. Top that, champ."
―Metze to Joe at the end of Volume 3.[src]

"Gunslinger Joe does not leave here alive, you hear me, you worthless worms? He is stomping all over the legacy of my ancestors with his dirty little feet. Ten thousand marks and a promotion to any man that brings me his head! Jesus Christ almighty...For the love of God! Someone explain to me why this football bastard isn't dead yet!"
―Metze's concern in Volume 3.[src]

"This is what they call poetic justice, Joe. You could have had a decent life taking a dive on the field for the Reich. Now look at you. A limp dishrag groveling on the floor. Before I shoot your brains out, any last words? {...} The Sonnengewehr? Oh, that's not operational yet. Are those your final words, slave?"
―Metze before being tackled and killed by Gunslinger Joe[src] 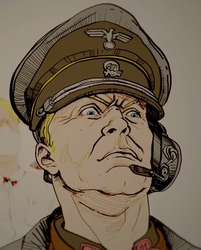 Metze as his time as a dentist.

Metze underestimates Joe; this ends about as well as you'd expect.

Roderick Metze falls to his death after Joe tackles him.