For a similar weapon seen in Return To Castle Wolfenstein, see Thompson.

"A standard-issue US Army submachine gun. Its high fire-rate makes it useful when taking on many enemies at close range."
―Journal description.[src]

The Submachine Gun is a fast-firing weapon with a large magazine size and low overall recoil, making it useful when engaging multiple enemies up close or for sniping. Ammunition for this weapon is very easy to find due to it sharing the same pickup type as the Handgun 1946, though firing it wildly would still result in shortage.

Although handy to have, the Submachine Gun is quickly supplanted by the vastly more useful Assault Rifle 1946, which can be picked up from the first enemy soldier encountered. Compared to its replacement the Submachine Gun is substantially weaker, harder to get ammo for and cannot be dual-wielded.

It does not make an appearance after the timeskip nor does it have a 1960 counterpart. But in Wolfenstein II: The New Colossus, a similar weapon (albeit of German manufacture) named the Maschinenpistole is introduced.

It also mirrored the fact that the Nazi actually invented the concept of assault rifle in the weapon industry with the introduction of the STG-44 which is more superior than the SMG due to its larger caliber, having the suppressing fire function of a light machine gun, and a more reasonable accuracy.

The Submachine Gun being fired.

The Submachine Gun being reloaded. 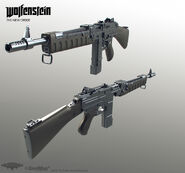 Parts of the Smg
Add a photo to this gallery
Retrieved from "https://wolfenstein.fandom.com/wiki/SMG?oldid=63877"
Community content is available under CC-BY-SA unless otherwise noted.