The SNES port of Wolfenstein 3D was released in Japan in February 1994, in the United States in March the same year and in Europe throughout the year.[1][2] The port was coded by id for the Japanese company Imagineer. The SNES port is distinct from other ports for being censored to conform to Nintendo policies.

The Japanese Super Famicom version was altered further. Adding the subtitle "The Claw of Eisenfaust", the Japanese version's story does not follow the original's Adolf Hitler, nor Staatmeister. Instead, the main antagonist is a man called "Adolf Trautmann" who's using an experimental virus called "Medicine LDD4" to resurrect the dead. He then wants to use these so called "Evildeads" as well as other mutants to take over the world. Blazkowicz is sent out to stop him.

There is a prototype version of the SNES port. Changes include: 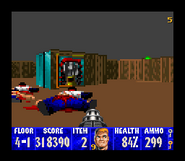 Look at all the blood! 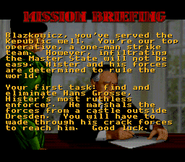 Oh no, not Hister! 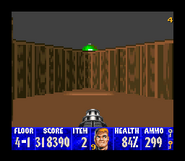