Edit
watch 01:33
Who is Set Roth?
Do you like this video?
Play Sound

Deceased; passed away by old age.

Set is a genius-level man who has improved the resistance's chances of beating the Nazi war machine. He was a brilliant inventor, creating machines that could even disintegrate anyone inside it. In addition, he was a skilled doctor, saving Blazkowicz's life twice. He was also quick to anger and irritation, notably showing this to Sigrun Engel when she sings, and losing to Max Hass by chess. When losing at chess, Set shows childish behavior such as name calling and throwing some chess pieces.

To the outside world Set Roth lived as a watchmaker in Stuttgart, Germany. But secretly he was a member of the Da'at Yichud, performing amazing research in a variety of scientific fields. He managed to hide for many years when the Nazis took control, but eventually they caught up with him and shipped him off to the labor camps. According to other inmates, he is the longest-surviving member in the camp due to his scientific knowledge.

The Über Concrete was developed by Set with Da'at Yichud's knowledge under Nazi supervision. Unknown to his "patron", Set did his part of resistance by adding a flaw to the formula, which causes the Über Concrete, which is supposed to be tough as steel, to deteriorate over time and grow mold. Its structure in turn weakened and even caused buildings built with it to crumble. The Nazi authority never discovered the sabotage, but insisted it was caused by something else.

Since 1941, Set remained detained in Camp Belica where the flawed Über Concrete was being manufactured by the camp's forced labor population under Nazi supervision. B.J. Blazkowicz managed to infiltrate the camp disguised as a prisoner and found Set in Block 4 of the prison after switching uniforms with Milo. Set refers to B.J. as "Shimshon", which is Hebrew for "Samson".

Set was found in the camps barracks where he was attending to the wounds of another prisoner. Set was convinced by B.J. that the Kreisau Circle required his assistance because of his knowledge of the Da'at Yichud. Set agreed but only if B.J. would help him shut the camp down and retrieve a detronic battery for his custom made remote for the Herr Faust. Agreeing, B.J. helped shut down the camp's security systems and ended up retrieving the battery for Set; however, he was captured before he could deliver it. Eventually put up for execution for the members of Block 4, B.J. tosses Set the stolen battery and he places it into the controller, causing Herr Faust to injure Frau Engel and set him free.

He and Blazkowicz boarded the Herr Faust and fought their way through the heavily guarded camp where he released the prisoners and escaped with Blazkowicz in a truck.

Upon arriving at the headquarters of the Kreisau Circle in Berlin, Set explained the technology of the Da'at Yichud to the Kreisau Circle and revealed to them that the Nazis only took the technology from one of many safe keeps that they had scattered over the world. Knowing what was needed, Set required a U-Boat and also helped repair the Tunnel Glider in order for Blazkowicz to hijack a train in the underground railroad.

After Blazkowicz hijacked the Eva's Hammer, Set assisted in the opening of a vault containing some weapons and technology developed by the Da'at Yichud. Blazkowicz and either character (Fergus Reid or Probst Wyatt) accompany him and take a couple of inventions such as the Spindly Torque, a Power Suit, and the generator upgrade for the LaserKraftWerk.

Set returns in Wolfenstein II: The New Colossus. At the beginning of the game, he is fighting against the Nazis after they attack the the Eva's Hammer by setting microwave emitter booby traps. Later on, he helps Fergus replace his right arm. In addition, and most importantly, he rescues B.J.'s head after Irene Engel beheaded him on live-television. He replaces B.J.'s broken body with a Super Soldier's body, which allows B.J. to fight again.

He also owns a hybrid monkey with a cat head whom he named Shoshana. He found the cat after the Kresiau Circle first captured the Eva's Hammer, and when he found that it was dying of bowel cancer, he transplanted its head onto the body of a squirrel monkey that he found chewing on a blasting cap.

When B.J brings him a Da'at Yichud object which Super Spesh gave to B.J back in Roswell, Set becomes obsessed with figuring out what it is and how it works. He describes himself as being "absorbed and angry" with the artifact and further describes it as "inconceivable" and "incomprehensible" when Fergus and Max are around; all he knows is that it's a key. In the Wyatt timeline, when a detoxing Wyatt asks if the object is a doorknob, Set seems to get a burst of inspiration, but doesn't state what it is.

Following the events of the New Colossus, he mentored Abby in Da'at Yichud technology and science and later passed away due to his old age. But not without leaving a project to Abby to complete a new set of Da'at Yichud Power Suit 18 years later at a secret hideout with a significant modification from her, before she gave both Jessica and Sophia Blazkowicz to wear and join them on a mission to look for their missing father in France. Furthermore, he also enables the US and the Global Resistance to access to more Da’at Yichud vaults giving them more technological advantages over the Nazis.

Set speaks to B.J. on the Über Concrete.

Set and B.J. escaping the camp.

Set Roth having a conversation with the Kreisau Circle.

Set with Fergus in the Da'at Yichud Safe.

Set with Anya and Bombate, being captured by Frau Engel.

Set with Anya and Bombate, reuniting with B.J. in Deathshead's Compound.

Set being helped by Bombate and Anya escape Deathshead's Compound. 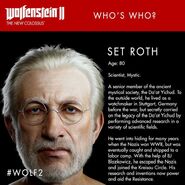 Set's Bio in The New Colossus.

Set and B.J. while Nazis are killed by Microwave Emitters.

Set Roth with B.J. and Anya.

Set with Anya and Fergus.

Set goes to retrieve a contraption for B.J.

Set Roth getting furious from losing to Max Hass in a chess game due to his carelessness.

Set vomits inside the jar he used to preserve B.J. decapitated head during B.J. birthday.

Set Roth frustrates for not be able to enter the toilet due to being cobbled by Super Spesh a few days ago before his demise.

Set with the group.

Set gets frustrated with the God Key.

Set with the group at the submersible.

Set brings a contraption to B.J.

Set at the surprise party.

Set at the surprise party.

Set with the group.

Set helping B.J. in his wheelchair.

Set with Wyatt and Anya.

Set listening to Grace readying to start the revolution. 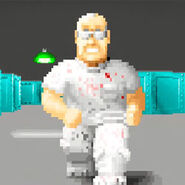 Set Roth as the Episode 2 boss in Wolfstone 3D.