Wolfenstein Wiki
Register
Don't have an account?
Sign In
Advertisement
in: Enemies, Undead Enemies, Wolfenstein: The Old Blood,
and 5 more

"Look at that. It's raining Nazis."
―B.J. on the Shamblers falling from the sky.[src]

Shamblers are a new type of enemies encountered in Wolfenstein: The Old Blood.

Shamblers are undead creatures created by an unknown chemical substance (assumed, if not heavily implied, to be the earliest invention of the Da'at Yichud) originally discovered in the Parchments of Constantinople by King Otto I (which he first assumed to be a gift from God, but due to its destructive and uncontrollable nature he began to believe it to be the work of the Devil). Using the fragmented material, he was able to use the substance to make beasts of war.

His early research caused beasts to grow in size and strength, and led to early success against the Magyars. However, the beasts turned out to be pus-ridden and in a state of decomposition.

The second set of tests made the beasts grow even more in size, yet even less controllable. However, the beasts also began emitting a strange green gas, which had a hidden effect of causing some of the dead to rise again, in some cases in flames. Otto believed the ideas he had first thought were sent to him by God were actually the work of the Devil. He had Konrad, a local abbot of Wulfburg, seal all of the research underground along with the beasts and chemical substances, and burn Wulfburg to the ground to destroy all evidence of the research, hopefully to prevent others from retracing his work, lest someone unleash the terrors again. The Abbot was apparently relocated to another parish, upon threat of death if he ever divulged what actually occurred, and what was hidden under the burned city. It is believed that future priests of Wulfburg may have been given the sacred task of keeping the secrets safe from privy eyes.

Helga von Schabbs had been receiving dreams since she was a girl, some of which she believes to have been the voices of Otto I, her ancestor, trying to make contact with her.

This inspired Helga's researches into the paranormal in which she began interviewing and collecting the dreams of patients who are able to hear the voices coming from the underground site, which help her get closer to and discover Otto's research. Many of these dreams might actually be warnings, not to venture into Otto's sealed vaults. One patient interviewed discusses having visited the Defiled Church as a child, and hearing strange voices, and feeling as if rotting hands were grabbing for him, pulling him down into the dark abyss, foreshadowing the terrors that would be released if Helga were to pursue her research.

For others, the voices seem to drive the hearers mad, with promises of treasures or powerful secrets, enticing them to open the crypts, and release the sealed abominations and substances inside.

Dead bodies that come into contact with the emitted gas are reanimated as mindless violent zombies that aggressively attack any uninfected individuals nearby without a thought for self-preservation, although some of them seem to have retained some intelligence or at least residual reflex movement as some are still able to use firearms, albeit not very accurately, spraying bullets about in a wild manner. Their most notable physical feature is a fiery glow emanating from their eyes and mouths, indicating an affinity to fire.

Some Shamblers are slow, while others are capable of great bursts of speed. However, those with the fastest speed seem to be the most 'burnt-out' on the inside, displaying the most fire exiting from inside their bodies which causes their skin to burn and blister.

The unknown compound seems to react differently to different individuals. In some cases it seems to be inert, even when breathed in, and only changes the individual if they die while it is inside their bloodstream. For others, the compound will kill them immediately upon exposure (in particular if they have been wounded or weakened in someway), only to reanimate the body sometime later.

The transformation time varies wildly with each individual. While most reanimations can take minutes, or sometimes seconds after death (usually with a burst of fire before reanimation takes place), some individuals will change before the corpse could actually fall to the ground. Newly-transformed Shamblers are immediately active and hostile towards any living being around them, be they previously friend or foe.

Shamblers can take an excessive amount of trauma before they 'die', but enough bullets will still 'kill' them. Headshots are the most efficient method of disposing of them, though striking their head with the Pipes also works. Curiously, some Shamblers appear to have wooden spikes and glass bottles jammed through their skull, or even falling from the sky from Zeppelins, only to rise soon after. Still, according to some research, it is apparent that only massive damage to the brain matter, or complete destruction of the body is the only way to ensure that a Shambler will not rise again. They will die if they land into water, as can be witnessed in Chapter 6. They also lost all kinds of feeling. If B.J managed to stealth-kill a soldier and he turns into a Shambler, B.J. can bump into him from behind but the Shambler won't notice him at all.

Curiously, in rare cases a killed person will not rise as a Shambler, despite the contaminated surroundings they are in. It's possible that not every individual killed necessarily become Shamblers (or at least it takes longer for some individuals to transform).

As B.J. have managed to survive up to 14 years after the events of The Old Blood without any physical deterioration, it is possible that the effects of the chemical will wear off after a while in a living subject (or there would be a risk of those being exposed becoming carriers).

The exact name or nature of the compound is never described in full detail. It is only referred to as the 'alchemical compound' in most letters that refer to it. It is also believed by King Otto to have been ultimately inspired by the Devil rather than God, which would put it as destructive research opposed to the more benevolent (or at least neutral) purposes of the Da'at Yichud philosophy (which is technology designed to get closer to 'God' - the father of 'Creation'). 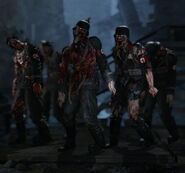 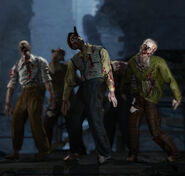 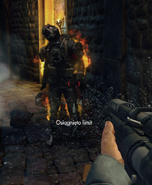