The Winchester Model 1897, also known as the Model 97, M97 or Trench Gun, is a pump-action shotgun with an external hammer and tube magazine designed by John Browning and manufactured by the Winchester Repeating Arms Company.

The Model 1897 was an evolution of the Winchester Model 1893 designed by John Browning. From 1897 until 1957, over one million of these shotguns were produced. The Model 1897 was offered in numerous barrel lengths and grades, chambered in 12 and 16 gauge and as a solid frame or takedown.

Ingame, the M97 Shotgun holds six shells in the magazine and in the reserve, it holds 30. It is very effective against the undead, such as the zombies and mummies. But, as with certain other weapons, ammunition is limited in the game, so use it wisely. The Shotgun appears only in Return to Castle Wolfenstein: Tides of War, first found in the Village of Wulfburg. For some reason, the shotgun does not make it to the base game. 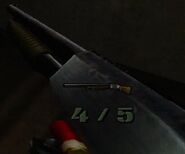 Blazkowicz taking down the enemies with his shotgun.
Add a photo to this gallery

Retrieved from "https://wolfenstein.fandom.com/wiki/Shotgun?oldid=59315"
Community content is available under CC-BY-SA unless otherwise noted.