Return to Castle Wolfenstein
The OSA M1S Snooper Rifle is an experimental sniper rifle created by the American army for OSA operation and against infiltration tactics. It is equipped with a internal suppressor and an infrared sniper scope for an active night vision sight depicting a green-and-white image, with the IR projector at the bottom of the rifle. It fires .30 caliber ammunition. The maximum that can be held at once is 15 rounds (5 in the magazine and 10 in reserve). Being an allied weapon, ammunition is not dropped by any enemy and should be used sparingly.

The rifle can one-shot-kill any normal soldier. However, it is not as effective against armored targets, such as flamethrower soldiers and x-creatures. It should also not be used against the Undead, as it doesn't do the same amount of damage on them that it does on humans. The rifle also has a low rate of fire and not recommended for extended fights in the open.

This weapon is obtained in the first level of Mission 3: Weapons of Vengeance. On later missions, the Snooper rifle is one of B.J.'s starting weapons. The ammunition is very rare throughout the game and can be found in the secret areas.

This weapon is not available in multiplayer. 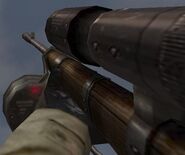