Soldiers (German: Soldaten), or Infantry (German: Infanterie), are the most frequently encountered enemies in Return to Castle Wolfenstein. They are generally armed with Lugers, MP-40s, Mausers (with Scope sometimes) and in a few levels, Stens. There are two varieties, Wehrmacht soldiers with their field gray or camouflage uniforms, and SS soldiers, recognized by their black uniforms.

Wehrmacht soldier with a field grey uniform and a patrol cap 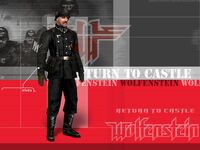 SS infantry with an MP40.

SS feldgendarmerie with a trench coat

SS soldier with a trench coat