Wolfenstein Wiki
Register
Don't have an account?
Sign In
Advertisement
in: Nazi Soldier, The New Colossus enemies, Raumwaffe,
and 3 more

The Soldier (German: Soldat) is the common enemy infantry unit that Captain B.J. Blazkowicz faces in his campaign against Irene Engel in Wolfenstein II: The New Colossus.

Soldiers in Wolfenstein II are mostly stationed in the United States under the command of General Irene Engel. These also include troops in Section F of Eva’s Hammer and Venus. They are serving their best to exterminate any resistance to the Nazi rule over the United States and the world, as well as ensuring technological development and the safety of the German people. They come with various weaponry such as Maschinenpistole, Sturmgewehr, and Schockhammer X. Their helmet can be removed and obtained by the player if shot off. However, if killed by other methods, the helmets become unobtainable by any means.

Soldiers in The New Colossus say lines based on the situation of the battle. Some of the soldiers will yell out their plan to flank Blazkowicz if Blazkowicz is exposed and can be easily flanked while declaring their intention to throw a grenade if Blazkowicz is in heavy cover. Likewise, the tide of battle also dictates said lines: if Blazkowicz is heavily wounded the Soldiers will tell him that he can't win or he should surrender while yelling in horror if Blazkowicz is slaughtering them in rapid succession.

They share a lot of common traits with the one in the New Order, so it's recommended to see Soldier (The New Order) for reference. The main key difference from their New Order counterparts a year earlier is mainly their tougher armor, more diverse set of weaponry and tactics, and variants. They seem to now act more like a military than a policing force. This is likely due to learning about General Engel's injuries, her lover's assassination, Terror Billy making a name for himself and the Resistance, William Strasse's demise, the attack on the Lunar Base, the destruction of the London Nautica and Monitor, the Gilbatar Bridge's destruction, and the liberation of Eisenwald Prison. As a result, Nazi military technology has progressed to prepare for impending revolutions.

Though it has not been fully confirmed yet, the soldiers from The New Colossus could possibly be genetically and physically engineered to be tough, bullet-resistant troops. Not only does this pertain to the armor they wear, but the fact that NCO variant soldiers (having no armor equipped on them) can take direct shots to the chest and still keep on fighting before they finally drop dead.

They are the mainstream troops of Nazi Germany in 1961, conducting many operations such as raiding resistance strongholds, patrolling occupied cities, or guarding key military facilities. They often wear the series' symbolic iron face masks over a black balaclava (shown in the gallery below). They are equipped with the Maschinenpistole and Sturmgewehr. Those who carry Sturmgewehr wear slightly heavier armour as shown in the picture below. They wear uniforms similar to their 1960 counterparts.

Atom Soldiers are hazmat troops operating in mainly hazardous areas like Neue York. They wear a gas mask and yellow hazmat suits to protect themselves against nuclear or biological threats. Their combat ability is no different to normal soldiers. Also, Those who wield Maschinenpistole looks slightly different and light armoured than soldiers like this picture who equip Sturmgewehr. A picture is shown in the gallery.

Venus Soldiers are soldiers guarding the Nazi facilities on Venus. They wear orange-coloured suits which comes with a presumable coolant supply. However, they are not seen refuelling said coolant. As with most other units, their combat ability is the same as normal soldiers.
These soldiers only wear sleeveless shirts and pants, which could mean they are either off-duty or NCOs. They can be seen in Section F of Eva's Hammer as members of the Nazi Remnant. Skills and weaponry are the same as normal soldiers.
These are military technicians who wear a green engineer uniform and, sometimes, a cap and glasses. They are present in places where technical engineering is highly required such as Venus or the Ausmerzer. Alongside shirt soldiers, they can also be seen at Sector F. They are armed with the Maschinenpistole. Their green uniform has a company symbol of "AXTO", which is presumably an engineering company according to the concept art book of Wolfenstein: The New Order.
These are the scientists who control high-tech facilities such as the Oberkommando (Area 52) and Venus. They are armed with the Maschinenpistole and sometimes wear helmets, which can be obtained by the player if shot off.
This is a distinct soldier class that operates alongside normal soldiers, Atom soldiers, and Venus soldiers. They wield the Schockhammer X and have heavier armour than normal soldiers. Movement is a little bit slower but they approach the player rather quickly to use their shotguns effectively.
This is another distinct soldier class as the Shotgun Elites. They wield the Sturmgewehr but fire in semi-automatic mode. They are equipped with an optical visor that succeeds the Marksman in The Old Blood. They often support other units at the medium range.

Ku Klux Klan is an American far-right, white supremacist group-turned-paramilitary organization tasked to govern the South by the Nazis. They are minor enemies that are only encountered in the Southern States during the player's hunt for the Oberkommando. They wear white hoods which serve little to no protection but may hide them during nighttime. Unusually, they speak German just as the Nazis. They wield the Maschinenpistole.

Moon Soldiers are troops guarding the Nazi facilities on Moon. They wear white suits and they are only seen in The Diaries of Agent Silent Death when Jessica Valiant pursues her arch-enemy, Gerhardt Dunkel on his moon base. Their combat ability is the same as normal soldiers. 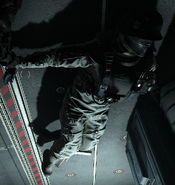 Concept art for the engineer.

Concept art for the scientist. 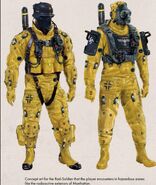 One of Elite with Sturmgewehr.

Another Elite, but heavier armor. 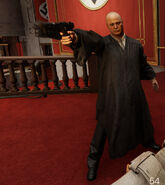 Nazi Judge in BJ's daydream. In reality, you cannot fight him.

A Nazi Soldier being felled down, as a nearby soldier shrieks in horror at the carnage

Soldier with no iron face mask

An elite with no mask

An elite with lighter armor
Community content is available under CC-BY-SA unless otherwise noted.
Advertisement