Wolfenstein Wiki
Register
Don't have an account?
Sign In
Advertisement
in: The New Order enemies, Nazi Soldier, The Old Blood enemies,
and 3 more

Edit
watch 01:05
Soldiers of The New Order
Do you like this video?
Play Sound

The Soldier (German: Soldat) is the common enemy infantry unit that Captain B.J. Blazkowicz faces in his campaign against Deathshead in Wolfenstein: The New Order, Wolfenstein: The Old Blood.

The standard Nazi rank-and-file are encountered in vast quantities by the player throughout the game. Individually, they are easy to deal with. They can be easily evaded by Blazkowicz going stealthy, and can be taken out fairly easily by Throwing Knives or several pistol shots. Individually they are also fairly weak: even when alerted to his presence, a single soldier is almost always no match for Blazkowicz. All variants of the Soldier encountered throughout the game are mere reskins of each other and behave just the same way- down to individual stats. This may produce interesting scenes where a cloth-uniformed Luftwaffe soldier will take as many 7.92mm bullets as a heavily-armored Nazi regular to kill.

At this time in history, basically all nations and countries have submitted to Nazi forces by now, and uprising attempts are not even very common, except in parts of France and the Tunisia Campaign. The very design of the Soldier 1960 seems to be rugged, more armored look, almost acting more so as a specialized police force instead of an army unit. However, this does not hinder their ferocity.

With that said, however, Nazi Solders are not to be underestimated. Their sheer number is more than enough to compensate for each individual's lackluster performance, and can overwhelm Blazkowicz easily if he lets his guard down. They are also deployed as escorts to the vastly more powerful Super Soldiers and Guard Robots and can serve as distractions to allow their larger comrades to unload on a busy player.

For his regiment of Nazi soldiers, Deathshead has hand-picked the most loyal and fearsome combatants the Heer (army) has to offer. As part of this elite force, Deathshead's soldiers are promised high-ranking positions in the Nazi Party once the war is won. Judging by the posters in Deathshead's compound in 1946, the packs they wear are likely to keep them from being shocked by the Baltisches Auge's electrical cannon. The packs seem to be able to detect when the Soldiers are dead and will turn off when a Soldier dies or is turned into a Shambler. Their helmets can be taken off by a headshot.

They are only encountered in The Old Blood and the prologue chapter of The New Order. In the Old Blood, there are Elite variants with deeper voices and similar uniforms, but these soldiers have different packs and separate character descriptions. They wear heavier helmets that cannot be removed by a headshot. It is assumed that these troopers are the prototypes of soldiers in 1960.

As technology advanced, the regular infantry has been equipped with an even tougher suit to fend off against any uprising attempts. They are sometimes confused with members of the Deathshead's Commandos due to having similar armour and uniforms. This variant of the Nazi Soldier is the only enemy not seen in the characters roster in the extras menu, and is essentially one of the central mascots of The New Order, alongside B.J. Blazkowicz, himself.

They replace their 1946 counterparts after the time skip and are encountered in virtually every (post-prologue) level of the game except for the Lunar Base mission.

Their headgear cannot be taken off even after they died just like Deathshead's Commando and unlike other soldiers.

They are referred to as Black Guard in the game files, and Deathshead Elite Units by Fergus or Wyatt in the level Return to London Nautica.

They wear heavy armour and have roughly twice the durability of most regular soldiers.

Luftwaffe grunts are fearless and skilled combatants equipped with assault rifles and shotguns. Individuals are carefully selected to ensure that the proud Luftwaffe of Germania consists of only the most dedicated and pure of blood.

They are only encountered in and around the London Nautica.

More formally known as the Marine-Infanterie, these are naval infantry units specializing in marine warfare. They carry assault rifles and grenades like other infantry units, though there also exists a rarer shotgun-wielding variant. Their helmets can be taken off if they have one.

Kriegsmarine troops are only encountered during the U-boat mission.

Because of the dangers associated with isolation, the scientists on Moon Base One work in shifts of between six months up to a year before being given time off.

They are only encountered on the Lunar Base, and can't be directly fought.
Nazi infantry sent to the African front to combat any resistance in North Africa like their real-world counterparts. They are armed with the Assault Rifle 1960. Their helmets can be taken off.
The guards of Eisenwald Prison and Camp Belica, have no qualm about interrogating, torturing, even killing prisoners, as they're fit to work in correctional facilities of Germany. They're either armed with a baton, assault rifle or shotgun, they can be a real threat if you're playing on higher difficulties.
Soldiers promoted to German Space Marine Corps, they capable use of futuristic weapons and pressurised body armour, technology almost beyond the Wehrmacht, as being a specialized military unit.
Elite members of the German Space Marine Corps, stronger than a regular Space Marine, equipped with better armour and better weaponry, specifically a plasma rifle.
SS elite members and General Deathshead's military unit, simply efficient, brutal and merciless, trained under the harshest of conditions in Siberian training camps near the dreaded Gulags. They are armed with a variety of weapons, and they wore thick armour in battle.
The frogmen for Kriegsmarine, wearing a newly developed, and bulky scuba-diving suit, also armed with a ricochet shrapnel-loaded shotgun. Fire Troopers are tasked to guard underwater facilities, and deal with high-risk situations, as their suits provide them protection against environmental hazards, which includes radiation.
Soldiers armed with a assault rifle with the rocket launcher attachment, in addition, they wear a bulky armour provides them protection, which makes them very tough to kill.
Soldiers serve as snipers on the grounds of Castle Wolfenstein, armed with a Bombenschuss, they don't wear armours, but they can still be deadly because their firepower can deal major damage.

Concept Art of the Nazi Soldier in 1960. 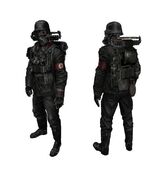 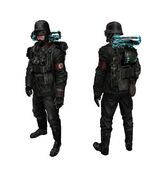 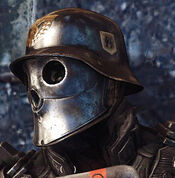 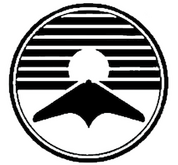 The insignia of the Gibraltar Bridge Guard.
Community content is available under CC-BY-SA unless otherwise noted.
Advertisement