The Schutzstaffel Soldier (Soldat) of the 1980s can be found in occupied New Paris, with a sizeable chunk of the Wehrmacht having pulled out of the United States in the wake of the Second American Revolution. It is the enemy from Wolfenstein: Youngblood.

In the wake of the liberation of the United States and the formation of the Global Resistance, a large section of the Wehrmacht has presumably been pulled back to defend the home territories of the Greater German Reich in Europe, including occupied countries such as France from attacks by the galvanized resistance. As a result, a large militarized presence can be found in many of the cities in Europe occupied by the Nazis.

The Nazi soldiers of the 1980s generally use much of the same equipment as their 1960s counterparts (likely due to budgetary and logistical considerations), but with some seemingly aesthetic modifications. Instead of wearing grey army fatigues and body armor, these Nazi soldiers wear leather vests and uniforms with modernized ballistic face masks. The equipment used by elites in their ranks, such as shotgunners, soldiers and marksmen, appear to have changed little since the 1960s. The new soldier types are the Jager (german for Hunter), combat medics, neosoldat, riot control unit Gestaposoldat, diesel-flamethrower soldat and the Hammersoldat.

Enemies in Youngblood have a unique enemy status system that has not been seen in past titles. Enemies have levels which determine their health, how much damage they inflict against the player, and their resistance to damage dealt by the player. Enemies now possess

All enemies in Youngblood have levels to measure their strength, which tends to increase with players as they level up. However, there are some instances in which enemies have affixed levels, in which case, players may downed even with one shot. It is advised to watch out for enemy levels; if the level is shown with skull, you are much less likely to beat the enemy.

Enemy Rank is shown as Roman numerals; the higher the number, the more barrier they have visibly and practically. For example, Neosoldat IV is more durable than Neosoldat II.

Rank 1 enemies are the first enemies encountered in the game. The only static Tier 1 enemy (level does not change) is the Neosoldat that you fight on board of Der Nachtfalter. Eventually, once the player has completed a few quests, Tier 2s will start to appear. By the time the player starts tacking the Brothers, the enemies will most likely be Tiers 3/4. Finally, during the Siegturm mission, it is common for maxed out (Tier 5) soldiers to be found.

Soldiers (soldaten) are basic grunt infantry used by the German Reich in Paris. They are equipped with the Sturmgewehr assault rifle, and are clad in black armor and uniform. They wear the same uniform and the same face mask as their counterparts from the 1960s. They have average health and no barrier. Will often attack in swarms with Gestaposoldaten/Neosoldaten.
Neosoldaten are Nazi light infantry in Paris. They are equipped with the Blitzgewehr submachine gun and clad in a red uniform instead of black. They also appear to wear a ballistic face mask with glowing eyes. There’s also the Lab X Guard, which is a black-uniformed variant of the Neosoldaten which is almost exclusively Tier 4/5. The ballistic face mask is of the same design as the one used by the Elite Soldiers in the 1960s, giving them a skull-like visage. They have average health and no barrier. In later tiers with both the Soldat, Neosoldat and Gestaposoldat, armor pieces such as chestplates will be worn, but these add nothing in terms of barrier.
Schlafsoldaten are Nazi off-shift soldiers, in a plain shirt and pants. They are primarily encountered aboard Der Nachtfalter, or in Riverside around the Nachtfalter crash wreckage, have very low health and no barrier, and are easily taken care of. They are not tiered and can be bodied in one shot by high-level players.
Riot control units utilized by the German Reich in New Paris, equipped with the Blitzgewehr. Gestapo soldiers are recognizable by their distinct khaki uniforms. Uniforms worn by lower ranked Gestaposoldaten closely resemble the real life Sturmabteilung (SA) uniform, a paramilitary organization of the Nazi Party, which lost prominence following the “Night of Long Knives” incident of 1934. Their collar even has the "SA" sign, so they may have been resurrected as part of the Gestapo. Higher ranked Gestaposoldaten wear uniforms similar to riot control gear. They have average health and no barrier. Functionally, they have the same A.I/stats as Neosoldaten, totally replacing them in the Bruder 1 district.
Specialized units of the Wehrmacht equipped with diesel-powered flamethrowers. They wear orange uniforms and can be easily spotted due to the light their flamethrowers emit. While idle, they will often be "burning" something, although they are usually just shooting their flamethrowers at nothing. They wear fireproof uniforms, but this is not apparent when diesel weapons are used against them or even their own flamethrowers, such as in melee kills. They have average health, high soft barrier, and are Elite rank troops.
Specialized sharpshooter units of the Wehrmacht equipped with a semi-auto marksman variant of the Sturmgewehr assault rifle. They appear to wear a tactical visor similar to the Marksman elites of the 1960s, having a boxier/more technical aesthetic. Their uniform is light gray. They have below average health, below average soft barrier, and are Elite rank troops. Despite their pathetic health and armor, they can do lots of damage in groups later/post game, so plan accordingly.
Combat medics deployed by the German Reich, equipped with the Kugelgewehr (rarely the Blitzgewehr). They often heal soldiers around them, replenishing health and armor extremely fast. Therefore, they should be taken out ASAP. They’re clad in a white, easily distinguishable uniform and are rather tall like the Kugelsoldaten. In higher levels, they wear Stahlhelms like the rest of the troops and a gas mask. They have very low health but high soft barrier. They are Elite rank troops.
Heavily-armored Wehrmacht close-quarter infantry possessing the Kugelgewehr shotgun. They wear bulkier armor than their regular Soldaten or Neosoldaten counterparts, and are similar to the Shotgun elites of the 1960s. Being equipped with shotguns, they tend to charge at you and get in close range, relying on their hard armor to protect them. Kugel means round, so it would probably refer to their buckshot ammunition. They have slightly above-average health, slightly above-average hard barrier, and are Elite rank troops.
Heavy infantry units equipped with the Hammergewehr, a heavy automatic shotgun with multiple rotating barrels. They are almost as big as Supersoldaten but are just normal humans wearing heavy armor. They have significantly reduced speed and mobility due to their heavy weaponry and bulky armor. They are very durable, with high health and high hard barrier, and are Elite rank troops. Oftentimes, on high difficulties, one is more than enough to challenge a player due to their immense suppression power, with many of them grouped together being a real challenge, even if your are higher in level than them. They are the only units that drop the Hammergewehr; Supersoldaten will not carry them like they did in TNC.
Female specialists of the Wehrmacht. Jägers are an all-female unit wearing full-body jumpsuits, a full-torso cuirass, and spacesuit-like helmets at their pinnacle, and are equipped with a suppressed/heavily modded Sturmgewehr. They are noticeably faster and more agile than regular troops. They have above-average health, above-average soft barrier, and are Elite rank troops. They are the only female enemies in the game (other than Julie Brandt) and bear a striking resemblance to their Elite Guard counterparts in past games.
Engineers and mechanics working under the Reich, clad in overalls. They are equipped with Blitzgewehrs loaded with bullets that ignites upon contact. They have low health and no barrier, and can be easily taken care of via a headshot. However, they have an annoying tendency to repair mechanic units, even healing Zerstorers in the heat of battle if they aren't taken care of. Therefore, they should be pasted ASAP.
Scientists working under the Reich. Regular scientists are equipped with the Blitzgewehr, wear white lab coats, and have low health. Lab X Akademikers wear black lab coats, are equipped with the Elektrokraftwerk, and have low health and low soft barrier.

The Terror Twins massacre multiple Nazi soldiers on board a zeppelin above New Paris.

A Nazi soldier shoots at one of the Terror Twins while backed up by a Panzerhund and a Drone.

X-Lab Akademiker. They are equipped with Elektrokraftwerk. 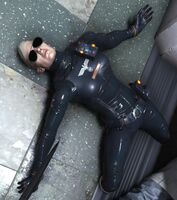 Soldiers on the enemy tiers tutorial. 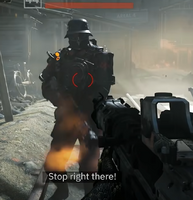 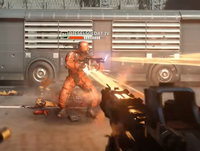 Diesel soldat from behind
Community content is available under CC-BY-SA unless otherwise noted.
Advertisement