The beginning of the level is in an overgrown room: the walls are mossy and vines obscure the player's vision. Behind the player, obstructed by columns, is a Landscape, as well as two Guards, if the player is playing at "I am Death incarnate!" difficulty. These guards will unavoidably see the player as soon as he spawns in the level. This room also contains a secret[secret 1]

This vine-ridden hallway exits to a central hub of the same mossy walls and vines, featuring 1/2/4 Guards. There are also 0/1/2 SS in notches of the room, deafened by Ambush tiles. This hub opens to:

There are 5 secrets in the level.

The second you begin the level, if you are at "I am Death incarnate!" difficulty, two Guards will see you. Rush behind a wall and open [secret 1] for ammo, then fight them.

Unless you're playing on the lower difficulties, there should be 2 SS in the central level from whom you can acquire a Machine Gun. Later, you can find a Chain Gun from the locked room in the northwest or from the Secrets[secret 3][secret 4][secret 5] in the southeast.

Note that the elevator room has the same floor tile as the locked room with treasure and a Chain Gun. Any combat that takes place in either room will alarm the enemies in the other room, who will then rush through the level to find you. Be aware of their pursuit, and realize that a locked door provides no relief, as a Guard can open it.

Like many levels in Spear of Destiny, all the negative space outside the accessible walls is comprised of purple brick, though this brick cannot be seen without cheats.

The level name is given in the Spear of Destiny Hint Manual and the iOS port as Tunnels Level 1. 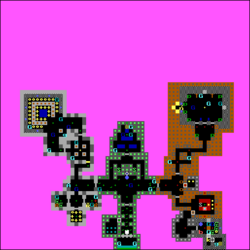 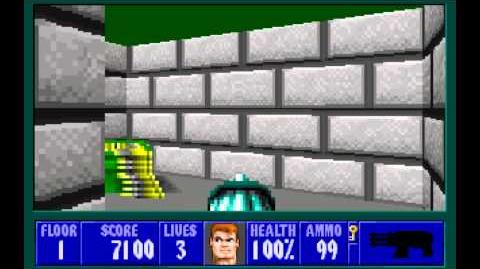 Spear of Destiny (id Software) (1992) Floor 1 HD
The Walkthrough of Floor 1 for The Tunnels Episode.
Add a photo to this gallery

Retrieved from "https://wolfenstein.fandom.com/wiki/Spear_of_Destiny/Floor_1?oldid=36235"
Community content is available under CC-BY-SA unless otherwise noted.