The immediate vicinity of the cage is Patrolled by multitudes of Guards, Officers, SS, and Mutants. Notably, this region is cut off entirely from access initially, and must be accessed by pushing a Secret which lies behind a locked door. However, the enemies inside can shoot at BJ through columns, making the outer ring a very dangerous place. Three of the corners of the outer ring tantalize the player with Treasure, Medkits, ammo, and even a One Up, all of which is inaccessible behind lamps and must be found through various Secrets.

To exit the level, both gold and silver keys are required. The gold key must be acquired by killing the Übermutant. Another group of enemies patrols in the elevator room, but they will inevitably be alarmed by level's end and brought out running.

This level can be quite unnerving. The entire middle region of the level is cut off from BJ, but the columns permit fire to be exchanged - usually in the enemies' favor. Avoid this one-sided combat by Sprinting between safe spots in the corners of the room. Don't stand still. Adding to the level's intimidating nature, enemies in the center constantly open and close doors, the distant noise of which gives the idea that the player is being followed.

BJ begins in a large cargo elevator, immediately outside of which is an Ammo Box. Pick this up and run outside - you will alarm several enemies. Retreat into the elevator and pick them off as they enter. The best weapon for this job is the Machine Gun, as the limited route for entry prevents overwhelming numbers and the Chain Gun can waste ammo. If you don't have either, pick a Machine Gun off an SS and then get a Chain Gun from the Secret on the wall to the left of the elevator. Travel to the north of the level and fight your way to the location of the silver key.

With the silver key in hand, open the locked door in front of the original elevator. A Secret prevents the enemies inside the room from coming out, so push it, and fight your way to the Übermutant.

The Übermutant is notable for being the fastest-moving boss in the game. His weapon, a single Chain Gun which fires only five rounds per volley, is not particularly deadly, but his superior speed lets him run up to you, delivering a critical attack. Ensure you have a Chain Gun of your own - there is one available in a Secret on the left as you exit the initial elevator.

Hold out on entering his room until you are sure there are no more enemies, as they oftentimes end up running into his cage with him. Like normal mutants, he makes no noise to warn of his presence, so be wary.

Once you do attack, find a corner you can use for cover. Come in and out of cover, blasting the Mutant, and moving as necessary when he enters his aim stance. For instance, one strategy is to open the cage door, then rush out of the enclosure (i.e rush outside the silver key door). After that, try to take potshots through the columns. He won't (usually) try to escape the enclosure if you keep taking potshots. The columns also allow you to hide easily as well. Eventually he should die, and will drop the gold key necessary to exit the level. Move to the South, defeat the 2-6 Mutants and any stragglers, and exit the level. 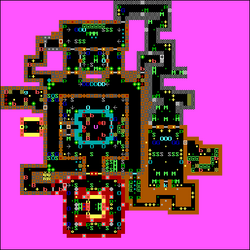 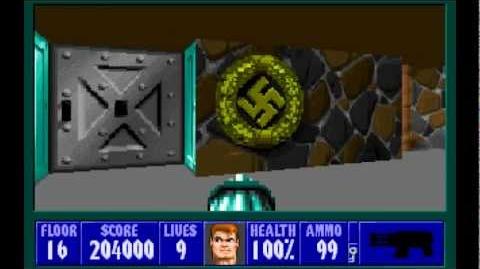 Spear of Destiny (id Software) (1992) Floor 16 - Boss Übermutant HD
The Walkthrough of Floor 16 for Episode The Main Castle.
Add a photo to this gallery

Retrieved from "https://wolfenstein.fandom.com/wiki/Spear_of_Destiny/Floor_16?oldid=40819"
Community content is available under CC-BY-SA unless otherwise noted.