Floor 17 is the first of the two floors of the Ramparts chapter of Spear of Destiny.

The level does indeed appear to take place on a castle's ramparts. This is evidenced by the blue ceiling which blends with the identical blue at the top of the stacked stone walls.

The layout of the level is very square, and almost perfectly symmetrical down the center. A square of clean gray stone lies concentric inside outer wall. The resulting space in between is where the majority of the level takes place, with standing Guards, SS and Officers lying in wait. Small wooden one-tile rooms hold Mutants (or keys), and purple bricks conceal hidden Officers.

The elevator at the end of the level is in the opposite end of the hall from where the player starts. Both gold and silver keys are necessary to enter. A wood panel room contains several Mutants behind a false elevator door.

There are only three Secrets in the level, one of which is pretty much useless.

Note that as soon as a round is fired in the great square passageway, 6/12/18 Guards on the other end of the level will hear and come running. It will take quite a while for them to get around to your position, but be aware that they may sneak up on you. There are many more enemies in the level, but the majority are deafened by Ambush tiles.

Upon beginning the level, acquire a Machine Gun from the SS outside the entry elevator if you don't have one. Even better, find Secret #2 for a Chain Gun.

To exit the level, one needs both gold and silver keys. These may be found in the groups of huts in the east and west of the level, inside the middle hut of each. Inside the end area, notice that the first elevator door you see is fake, containing 4/8/10 Mutants (as well as a Secret). The actual elevator door is inside, though it contains a Mutant as well beginning at level 4. 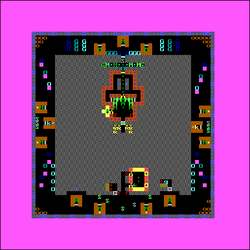 Retrieved from "https://wolfenstein.fandom.com/wiki/Spear_of_Destiny/Floor_17?oldid=35357"
Community content is available under CC-BY-SA unless otherwise noted.