Floor 5 of Spear of Destiny is the fifth and final level of the Tunnels chapter of the game. It is a boss level in which the player must defeat Trans Grösse to continue on to the Dungeons chapter.

The design of the level is mostly symmetrical in outward appearance. Gray and brown stone walls cover every room in the level, with the exception of some of the Secrets. The level is very well populated by standing Guards and SS on higher difficulties, but notably, the enemies appear to be randomly placed, scattered on the grounds, as if a large number of them were called in on short notice to counter BJ's threat.

An odd-shaped room, resembling three connected circles, lies in the west of the level. This room is filled with walls that provide useful cover. Trans Grösse lies at the very westernmost portion of the room, in front of a locked door to the elevator- he must be killed to get the golden key.

There are numerous secrets in the level, but annoyingly, three of them only hold Treasure, not useful for a boss fight. Four others, however, are notable:

In a worst case scenario (High difficulty, only pistol and 8 bullets) the very beginning of this level can be extremely difficult. Immediately upon leaving the elevator you are spotted by two standing Guards. Tempting as it is to kill them, there are up to 7 SS in an adjacent room who are within earshot of any scuffle, and who will come running upon any combat on your part.

Secret #1 is to the immediate south of the elevator. Locate it on the map, and exit the elevator. Ignore the guards and open the secret to find a Chain Gun and Ammo Box. Now you have the capacity to kill the Guards, as well as the SS who will immediately come running - stay in the Secret itself and let them walk in at you. Use one of their Machine Guns against them to save ammo. Once you've cleared the enemies, take care of any deafened guards in the room and pick up the meager supplies in the room behind the elevator.

Clear out the next major room. A secret in this next room holds several Ammo Boxes, removing any concern of running out of ammo. Open the door to the next room and fire one round, then wait for 1/2/4. There are more enemies in corners of the room, including Trans Grösse, but none of them will hear or see you yet.

Trans Grösse, a generic dual chain gun wielding foe, lies immediately in front of a locked door to the elevator, obscured by some walls from the entrance to the room. He enters an aiming stance for a moment before shooting, so the best strategy is to shoot him, then when you see him enter this stance, retreat behind a corner of a wall, exiting again to attack.

This level is very meager on health. Only three Food may be found outside of secrets, all of which is in the room behind the elevator. To find a more useful supply, sprint to the northern end of the large room Trans is in. He will spot you and come running, but this is unavoidable. Quickly kill the 1/3/4 SS in the vicinity and open the secret in the Flag on the eastern wall. Run in and enjoy the tremendous supply of Medkits and Food. You can also make your attack on Trans from here, utilizing the above method. If you run out of ammo, exit the hallway through the secrets on the other end and find secret #3, which is nearby.

Trans should die without too much effort. He will drop a golden key, which is necessary to exit the level. Once you've cleared out the level to your satisfaction, open the locked door to reveal the elevator. On "I am Death incarnate!" difficulty, an SS lies immediately behind the locked door, and another lies in the elevator itself. Be cautious. 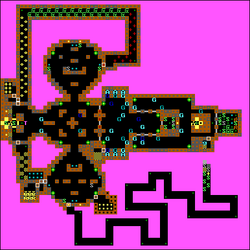 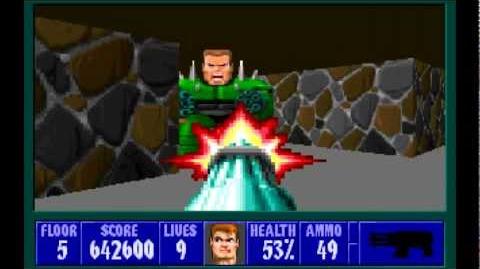 Spear of Destiny (id Software) (1992) Floor 5 - Boss Trans Grosse HD
The Walkthrough of Floor 5 for the Episode The Tunnels.
Add a photo to this gallery

Retrieved from "https://wolfenstein.fandom.com/wiki/Spear_of_Destiny/Floor_5?oldid=26182"
Community content is available under CC-BY-SA unless otherwise noted.