Floor 6 of Spear of Destiny is the sixth level in the game and the first level in chapter "The Dungeons".

The first half of this mission consists of blue-walled dungeons, similar to the ones in Wolfenstein 3d. After the gold doors, a series of red bricks rooms/hallways start.

(This walkthrough will show you only the fastest route to complete the map. Many rooms in this map can be accessed using different routes, therefore it's not mandatory to follow it. Also, this route doesn't include any side area, so don't follow it if you want to get 3x100%).

Once you've killed the enemies in the first room of the map, open the door across from your starting door. Kill the enemies in the next room, then open the door across from the door you used to get here. This one will take you to a very large rectangular hallway with a large blue island in the middle. On this island there is a door; open it, it leads to a room with two doors. Open the second door you come across to come to a room with only one door. This one will lead you to the gold key: kill the enemies guarding it, then grab it. Go back into the rectangular hallway and find a door you've not come across yet and open it. In the new hallway, open the door immediately to your left to reach your next destination: the room with the gold doors. Kill the enemies in it, then open one of the two gold doors. Kill the few enemies in the room beyond before entering the red bricks area. Go past a couple of small rooms and you'll enter a long hallway with 6 doors. Open the second door on the western wall. Kill the enemies in the room with blood, bones, cages and stuff, then open the only door in it. You'll now enter a small hallway with 4 doors. Again, open the second door on the western wall and you'll reach a room with a few chalices and another door. This one will lead you to the silver key. Backtrack to the hallway with 6 doors and open one of the two doors at its bottom. In the next room is the silver door: open it, kill the final hostilities, then exit.

1. In the first room, there is a secret across from the third cage on the left hand wall. It contains 4 dinners, 3 boxes of bullets and the chaingun. If you're starting this mission from scratch, this secret is very nice to have.

2. Open the door across from your starting door. In the new room. there is a wall signed by a poster that says "ACHTUNG!". Press on it to reveal two dinners, two treasure chests and 6 ammo clips.

3. In the hallway with 6 doors, open the first door on the eastern wall. In the next room, there are two doors: open the one on the western wall. Go past a small room and you'll enter a room with 4 treasure chests. Press on the wall with the swastika to the right to reveal a treasure/ammo cache.

4. Face the silver door, then turn left and press on the red brick wall: 9 boxes of bullets are waiting for you.

- In the final room of the blue area, the lights on the ceiling form a swastika (just like in E4M8 from Wolfenstein 3d).

- This map also features a long winding passage way with 8 crosses. Similar hallways can be found in E2M10 and E5M10 from Wolfenstein 3d, and all three levels, coincidentally, have the same music. 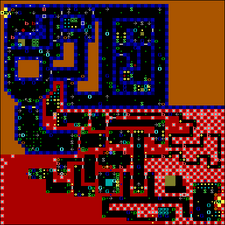 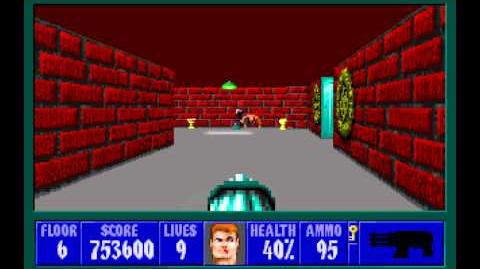 Spear of Destiny (id Software) (1992) Floor 6 HD
The Walkthrough of Floor 6 for the episode of The Dungeon.
Add a photo to this gallery

Retrieved from "https://wolfenstein.fandom.com/wiki/Spear_of_Destiny/Floor_6?oldid=36655"
Community content is available under CC-BY-SA unless otherwise noted.