Floor 9 of Spear of Destiny is the ninth level in the game and the fourth level in chapter "The Dungeons".

Unlike the previous floor, this map is neither very confusing nor very difficult. Its main feature are the secrets that act as short cuts to mandatory destinations.

Just like all the missions of the second chapter, you start in some blue walled dungeons. Your starting area is a long hallway with enemies, cages and lots of bones. Once you've killed the enemies at the start, find a pair of doors surrounded by mossy cobblestone walls. Both lead into a room with a few enemies, several wells and another couple of doors. Again, both lead to the same room, but this one has five doors. Behind each one is a winding passage way of crosses and other items, but all the hallways lead to the same room, which houses the gold key. Unless you want to use secrets 2-3, go back to the starting hallway and find the gold door between red bricks walls. In the room beyond, go straightforward, ignoring all the side hallways (unless you want to get 3x100%), and open the door between the swastikas. Follow the hallway and you'll reach a room with 3 metal islands in the middle and several enemies. Go past the islands and you'll find the silver key. At this point, you could use secrets 4-5 as short cut to your next destination. If you don't want to use them, backtrack to the starting hallway again and go to the eastern side of it to find the silver doors. Beyond them is a room with a gold door, behind the gold door is another silver door, behind the silver door is the exit.

1. At the second bend of the starting hallway, press on a wall in the corner. The secret contains 3 boxes of bullets and the chaingun. It is very nice if you're starting this map from scratch.

2-3. These two secrets act as a short cut to the silver key room and it's recommended to use them, because the normal route is very long and tedious. The first one is in the south-western corner of the gold key's room and leads to a room with 4 boxes of bullets, another chaingun, 3 chalices and a door. Behind it, is another secret, leading to the silver key, behind all the enemies guarding it.

4-5. These are short cuts as well. These two lead in the room beyond the silver doors and, once again, it's recommended to use them, considering the tediousness of the normal route. Secret n.4 is more or less across from n.3 and it leads to a door. Follow the long hallway of chalices, going past a rich treasure cache, and you'll eventually reach a door. Behind it, is another secret, leading in the second final room of the level. 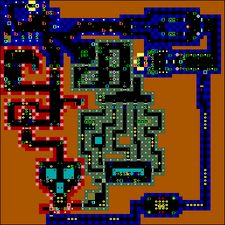 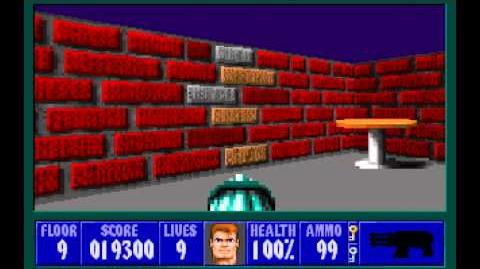 Spear of Destiny (id Software) (1992) Floor 9 HD
The Walkthrough of Floor 9 in the Episode The Dungeon.
Add a photo to this gallery

Retrieved from "https://wolfenstein.fandom.com/wiki/Spear_of_Destiny/Floor_9?oldid=33767"
Community content is available under CC-BY-SA unless otherwise noted.