Wolfenstein Wiki
Register
Don't have an account?
Sign In
Advertisement
in: Weapons, Stub, The New Colossus weapons,
and 4 more

The Sturmgewehr (Ger: "Storm Rifle or Assault Rifle") is a new assault rifle variant that appears in Wolfenstein II: The New Colossus and Wolfenstein: Youngblood. It has a sleeker design and better heat dispersion than the Assault Rifle 1960 from Wolfenstein: The New Order.

The next generation of the Assault Rifle 1960 that was used mainly by Nazi Soldiers and Elites alike. The weapon proves to be useful when taking on enemies at medium to long range. Despite its year of manufacture, it functions more similarly to the Assault Rifle 1946, as evidenced from the weapon's reduced 30-round magazine and slower rate of fire.

It's the third weapon B.J. collects in his arsenal on the Ausmerzer, either collecting one from a fallen soldier or from an arsenal. Many resistance members use the weapon, having a ammo drop in the shooting range. B.J. notably uses the weapon to kill a soldier while disguised as Jules Redfield at Hitler's film auditions.

In The Freedom Chronicles, it's the second weapon Gunslinger Joe collects in Volume 1 that can be found in a arsenal before the Commander section. The assault rifle can be upgraded with Armor Piercing in Volume 2 in the diner. Jessica Valiant can collect the weapon from fallen soldiers or from weapons lying around the volumes. Gerald Wilkins has the weapon half-way upgraded (Armor Piercing and Jungle Magazine) and collects the marksman scope in Volume 1.

STG-44 in which the Sturmgewehr is mostly based on.

Schematic of the Sturmgewehr.

The schematic of the fully upgrade Sturmgewehr. 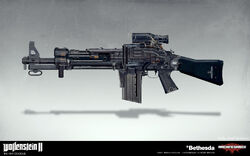 Concept art of the Sturmgewehr.

Wyatt's rifle on the left. 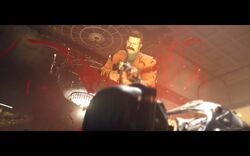 B.J. using the Sturmgewehr during the audition.

The Sturmgewehr with the Marksman Scope and Armor Piercing.

The Sturmgewehr (pictured right) dual-wielded with the Machinenpistole.

The 7.92mm ammo (shown in the jungle magazine) used by the Sturmgewehr.

The scope of the Sturmgewehr.

The iron sight of the Sturmgewehr.

One of the Blazkowics twin uses a Sturmgewehr with a drum magazine.

In the weapon customization menu.

with all the tempo sets