Edit
watch 01:30
Who are Super Soldiers?
Do you like this video?
Play Sound

The Supersoldat 46 is a newer breed of 2m to 2.4m tall super soldiers engineered by General Deathshead himself.

The results of Deathshead's inhuman experiments are tied to his desire to combine man and machine. The Supersoldat 46 is an early attempt by Deathshead to create a supersoldier using degenerated soldiers and cybernetics technology.

They are created from human subjects. After going through a chemical therapy, their bodies are surgically enhanced with steel and cybernetics and encased in bullet-proof armor. To purify the human subject's killer instinct, the brain is degenerated into a more primitive state, making them erratic and extremely violent. Regardless, these troops are shown to take orders without question from Deathshead and other Nazi officials and fight together with other soldiers.

The armor of the 1946 version of the Supersoldat is not as advanced as that of the 1960 version, with the 3 1946 Supersoldats fought in New Order only having overall durability only slightly higher than that of a Fire Trooper. The 1946 Supersoldats encountered in Old Blood are somewhat more heavily armored, but suffer from multiple weaknesses including exposed energy sources and vulnerability to having their armor plating pried off at close range.

It is fought 3 times in the entire New Order campaign, first as a boss in a containment chamber in Deathshead's Compound, where it lacks a weapon and can't instantly kill you with a punch. Two more are encountered in Chapter 9 when B.J. has to find his way back to the resistance HQ after retrieving a welding torch. The models encountered here wield an MG-46. The 1946 variant is potent at close range and it has much higher mobility than its predecessor. Staying out of their attack range is the most important thing to remember should B.J. run into one of these.

The Supersoldaten 60 is a refined version of the original model. A new and improved armored enforcer who wields an MG60 and wears a face mask resembling a Greek statue. This enemy shouldn't be taken lightly.

Like most things that exist in both time periods, the 1960 version of the Supersoldaten is essentially a technologically advanced version of the earlier 1946 type, with the majority of the updates being related to their equipment. Despite their upgraded equipment, their behavior and general characteristics seem to have changed little over the 14 years between the two versions.

Notably, the 1960 Supersoldat is also created on the Moon - they can be seen suspended unarmored and unconscious in tubes of yellow liquid throughout the lunar base. The creation of the 1946 variant is never seen so it is unknown whether this process differs from the one used to create its predecessors, although judging from the heavy facial scarring of the 1946 model, the process is more reliant on surgery rather than growth cultivation, as appears to be the case with the 1960 variant. Despite this, the face is as heavily scarred as its predecessor, suggesting a combination of surgical alteration and cultivation.

Their armor is generally more refined than that of their predecessors; instead of the mixture of flat, crudely machined plates of varying sizes assembled in an almost piecemeal fashion, the 1960 Supersoldaten armor is somewhat more rounded and curved, the components sized and shaped to provide a much greater level of coverage and visibly matching the underlying body parts while also sloped to effectively deflect projectiles, much like tanks and other armored fighting vehicles in both function and appearance. Additionally, the face protection plate of the 1946 version is replaced with a steel mask in the shape of a boldly styled art-deco human face while the head protection is changed to aesthetically resemble a steel version of the helmets worn by other Nazi troops.

As they wield the laser firing, electrically operated MG-60, the 1960 Supersoldaten can be a challenging enemy due to the combination of their very high damage potential, durability and excellent resilience against interruptions and stuns compared to other enemies. They have a high rate of fire so evading shots is difficult and there aren't many ways to deal damage to them without also being directly in their line of fire. The main issue is surviving their very high damage for long enough to kill them because their resistance to interruptions and stuns makes it very difficult to unload into them without taking fatal damage, as they simply won't stop firing even while taking extremely heavy hits.

The 1960 Supersoldat has extremely high damage resistance against bullet weaponry, requiring almost 300 rounds of assault rifle fire to bring one down. Energy weapons or explosives such as the Laserkraftwerk, the plasma rifle variant of the AR Marksman, the rocket launcher, or their own MG 60s are much more effective against them, though they still require many hits to kill due to their very high health.

The super soldiers deployed in occupied North America have been stripped of most of the human parts in favor of further cybernetic enhancements, replacing approximately 70 percent of their organic bodies. They also feature significant modifications to the design, including a new face mask, the addition of a frontal armor plate to protect the throat and an enlarged backpack.

Unlike their slow, lumbering predecessors they are all equipped with a rocket engine mounted on their backs that allows them to rapidly close the distance to an enemy. They also pack greater firepower and tactical versatility, carrying a pair of weapons rather than just one and using a more varied arsenal of Lasergewehren, Dieselgewehren, or Hammergewehren rather than the same weapon being issued to all of them.

Before the death of Wilhelm Strasse Deathshead, he sacrificed some of the armor on his latest generation of super soldier to accommodate the increased weapon payload and the rocket pack. As a result, 1961 variants of the Supersoldaten are significantly less durable when compared to the 1960 variant, particularly lacking the 1960s variant's heavy damage resistance against bullet weaponry (going down after only a few dozen assault rifle rounds, compared to a few hundred for the 1960 variant). Additionally the fuel tanks in their back may explode, creating an additional weakness that Blazkowicz can exploit.

The super soldiers of this age are scarcely different from their 1960s predecessors, and have been deployed in large numbers in occupied France, due to its proximity to Germany. Their continued presence is a major burden to the resistance since the end of World War II, as insurgents were always crushed by the cybernetic creatures during attempted uprisings. Unlike their 1960s counterparts, they use only the Lasergewehr and the Dieselgewehr, as the Hammergewehr is used by the Hammersoldat. The addition of improved armor plating makes them somewhat more durable than the 1961 variants, even against armor-piercing ammunition, though not nearly as durable as the 1960 variants. 1980 super soldiers have some minor cosmetic improvements compared to 1961, such as a metal plate used as a "nose" to cover their exposed nasal cavity.

The New Order and The Old Blood[]

Wilhelm Strasse with an Supersoldat in The New Order.

The Old Blood's Mk.I and The New Order's Mk.II

1960 Supersoldat without the face mask.

The heavily-scarred face of a 1960 super soldier.

The decal which 1960 Supersoldaten wear on their helmets.

The insignia which the 1960 Supersoldaten wear on their pauldrons.

The insignia which the 1960 Supersoldten wear on their chest plates.

The face of the super soldier in the New Colossus. Note the gorget (throat armour) not present on previous models.

A super soldier without a mask being burned to death by the mounted flamethrower of a Panzerhund.

The equally-scarred face of a 1961 super soldier.

Concept art of the close-up face of a super soldier.

A Super Soldier about to use its jetpack.

A super soldier in The Adventures of Gunslinger Joe. 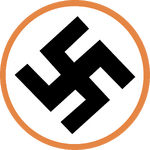 Fighitng a Super Soldier in Brother 3.

One of the twins fighting a level-3 Laser-Supersoldat.

Stealth killing a Super Soldier, chopping off one of his limbs.