"Well Agent Blazkowicz. You are a most impressive specimen. It would be my pleasure to dissect you piece by piece. Let me introduce you to someone. Do not confuse it with the mere prototypes you've encountered. This is the pinnacle of all my research. Das Über-Soldat. The Super Soldier. It will be my pleasure to watch it destroy you."
―Deathshead speaking to B.J. Blazkowicz in the X-Labs.[src]

Über-Soldaten, or Super Soldiers in English, are enhanced X-Creatures created by Deathshead that appear in Return to Castle Wolfenstein.

Super Soldiers are the end result of Deathshead's work in the X-Labs. These are his Über-Soldats, armed with a Venom gun, a Tesla gun and a Panzerfaust. Heavily armored and high in hitpoints, they don't go down as easily as their predecessors. It is not sure whether these soldiers were created to fight the Allies or to protect the site of Heinrich's resurrection and to be turned into zombie knights to aid with the resurrection. According to Deathshead's notes in the Operation Resurrection Project Book, he openly resents the latter option and believes that the Super Soldiers should be directly utilized as weapons of war.

The Super Soldier seen with and without his armor.

Concept Art of the Super Soldier. 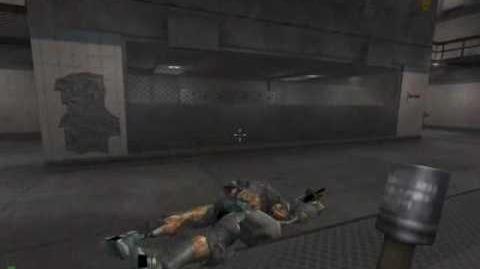 Return To Castle Wolfenstein - Super Soldier (2nd boss fight)
Boss Fight with the Super Soldier.
Add a photo to this gallery
Retrieved from "https://wolfenstein.fandom.com/wiki/Super_Soldier_(RtCW)?oldid=63112"
Community content is available under CC-BY-SA unless otherwise noted.