Supply Zeppelins appears in Wolfenstein II: The New Colossus, is flying aircraft used by the Nazi to patrol the street of New Orleans to search for Resistance members, as well as observing things from the air. where they carried other vehicles such as APC to deploy in United States to patrolling around the area for any resistance to start rebellion.

It is also serves as transportation vehicle to transport supplies and vehicles for the Nazi regime.

Concept art of the Airship. 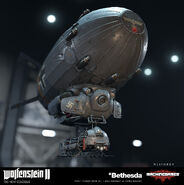 Detail of the carrying mechanism