Edit
watch 01:54
Arcane: League of Legends - The Loop
Do you like this video?
Play Sound

The Tesla Gun (German: Teslagewehr) is a short-ranged weapon which appears in Wolfenstein.

The Tesla Gun is a continuous beam weapon which discharges multiple arcs of electricity which automatically target nearby enemies, creating a spread akin to that of a shotgun. Like the Flammenwerfer it is a short-ranged weapon primarily useful against melee enemies such as Sniffers and particularly against Veil Assassins, one of which is spawned as soon as the player picks it up in order to demonstrate its effectiveness against them, unlike other weapons, the Tesla gun's auto target capability makes it useful against multiple agile enemies at close, or if you are cornered, Tesla gun beam will target everyone you faced, as long as they are at close proximity. With the Arc Nodes upgrade, it does 40 points of damage. Despite having auto-target capability, Tesla gun beam will not target the weak spots, such as the ones found on Heavy troopers, using Tesla gun against them will just waste your ammunition.

In general the weapon is difficult to use consistently though the game as ammunition for it is extremely limited and no enemies drop it, though the ammo drain is much slower than the Particle Cannon, you won't find anymore ammo if you run out unless you buy it from the black market or find it in the main missions. It is the third most context-sensitive weapon in the game after the Panzerschreck and Leichenfaust 44. Like Leichenfaust 44, the Tesla Gun can be only found once, and the player can't miss it because they need to pick up in order to continue.

In any case, it is a very effective close-quarters weapons with slightly lower power but comparatively wider spread thatn the particle cannon, making this gun a great choice when the player has multiple enemies surrounding him/her as oppposed to being lined up in a straight line.

The first Tesla Gun in the game must be picked up in the mission Hospital to deactivate an electrical barrier it is generating on the walkway above. No enemies carry the Tesla gun, though in early screenshots it can be seen in the hands of Heavy Troopers, probably as a placeholder for the Particle cannon.

Tesla Batteries (German: Tesla-Batterien) are a very rare pickup, and appear as blue box-shaped batteries with a white lightning bolt symbol on them.

The Tesla gun fires arcs of lightning that tear right through enemy troops. It fires multiple arcs, and is good at destroying foes in close quarters. Unlike its RtCW counterpart, the Tesla Gun in Wolfenstein will not bounce player back and has a shorter range, but this time the beams will find their mark automatically rather than spray all over. However, ammo is hard to come by outside of the Black Market. Because of that, the player will usually switch to the Particle Cannon, which is arguably the best weapon to use in short-range combat. In addition, the Tesla Gun is one of the most expensive weapons in the game to fully upgrade, while the Flammenwerfer is the cheapest.

A possibly early Heavy Trooper with a Tesla Gun 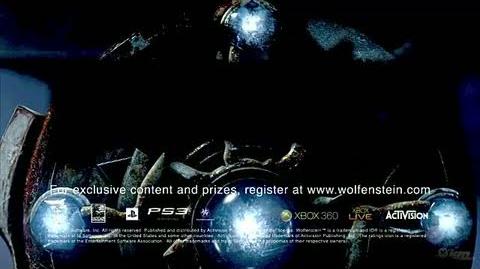 Wolfenstein Xbox 360 Trailer - Tesla Cannon Trailer
The Trailer of the Weapon Itself.
Community content is available under CC-BY-SA unless otherwise noted.
Advertisement