The Tesla gun is a weapon that shoots arcs of electricity at enemies. It can damage multiple enemies at the same time and sometimes bounce all of them back once you hit them, but it suffers from low damage output and limited ammo. It can paralyze human enemies for a short time but they still can fire at you. It has a medium range of fire, much shorter than other weapons. The Tesla gun can target multiple enemies at once, accurate aiming is needed with this weapon, although its electric bolt will go all over the place while firing. This weapon will bounce the players back when fired but will not harm them, due to its power, this might affect your accuracy. If used by Super Soldiers, expect being hit by this weapon at very long range, avoid being out in open or you will get shot very quickly. The Tesla gun has a maximum ammo capacity of 300.

This Tesla gun appears only in Return to Castle Wolfenstein. 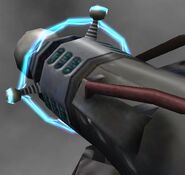 First person view
Add a photo to this gallery
Retrieved from "https://wolfenstein.fandom.com/wiki/Tesla_Gun_(RtCW)?oldid=62643"
Community content is available under CC-BY-SA unless otherwise noted.