Wolfenstein: The New Order
The Knife (Das Messer; real name unknown) is the nickname of a sadistic Nazi doctor who oversees Block 4 of Camp Belica. He is a minor antagonist in the game. The Knife is feared in-camp for selecting the nearest prisoners within reach, then torturing and incinerating them, apparently out of pure malice. His nickname is due to the fact that he takes great pleasure in torturing his victims with surface cuts with a knife often accompanied by a recording of discordant piano music.

One of B.J.'s side missions is to kill him while disabling the security systems. While sneaking into his laboratory, B.J. is captured and briefly tortured by The Knife. B.J. would survive before escaping a furnace of emaciated, defiled corpses. B.J. can return to the area where he was tortured and kill The Knife with his own weapon. Should B.J be spotted, The Knife will simply use the same attack patterns as the prison guards, with the exception of using a knife rather than a truncheon. 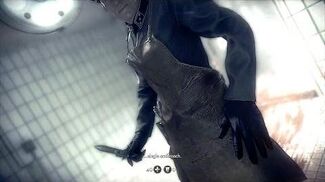