The Thule Medallions are mysterious artifacts created by the extinct Thule civilisation to harness the power of the Veil. They are a key element of the plot of Wolfenstein.

The extinct race known as the Thule created many marvels of technology and magic, and the Thule Medallions are one of their creations. They are hand-sized devices resembling clock faces, composed of a disk-shaped body with a four-bladed rotor above it, which mounts coloured crystals at the end of its arms; these Crystals give the device the ability to manipulate the Veil. These are normally white, changing colour when a special Nachtsonne Crystal is inserted into the middle of the device to indicate a new power is available. These Crystals only exist in one place in the world, a contested city called Isenstadt in Southern Germany.

It is apparently known to the allies that Nachtsonne Crystals exist at Isenstadt, but the game's plot implies that the Nazis have only just discovered that they can be harnessed for military uses. The Medallions themselves are hidden in booby-trapped ruins underneath the city itself, though at least one has been recovered by the beginning of the game.

The Medallion uses Veil Energy (also referred to as Black Sun Energy) to function, with each power using a set amount of energy from a reserve indicated by a curved blue bar on the Medallion icon in the bottom left of the HUD. The Medallion's power recharges slowly by itself, but can be recharged far more quickly from Veil Pools; however, only the "Veil" power allows the player to recharge from a pool while using it. Veil Barrels instantly recharge all the player's Veil Energy and can be used no matter what power is currently active.

The Medallion starts with only the power to enter the Veil, which makes BJ move faster, allows him to jump further, highlights most enemies in bright green and enemy weak spots in red, and allows BJ to see through Veil Walls and walk through them. A hissing sound can be heard while standing inside a Veil Wall, and exiting the Veil while inside such a wall will kill BJ instantly. Inside the Veil creatures called Geists become visible; these peaceful creatures will not bother the player normally. They die with a single hit and create an electrical blast which can kill enemies; however, if the player kills a large number of Geists they will be attacked by red "Suicide Geists" which dive at them and explode until they either exit the Veil or die. After exiting the Veil the player must wait a few seconds or they will be attacked again on re-entering.

The player later gains three more abilities; Mire slows down time, and can be upgraded to allow BJ to move at normal speed and produce a disintegrating shockwave, Shield protects BJ from most non-melee attacks and can be upgraded to reflect attacks back at enemies and disintegrate some enemies on contact, and Empower grants increased damage and can be upgraded to allow the player to shoot through first weak and then solid cover. All of these powers also activate the standard Veil power, and the three can be combined as the player wishes, though their energy drain will stack if more than one is used at once. Tomes of Power grant the player additional abilities; two of these increase the Veil Energy bar by 50% each time, while the other two increase the Medallion's natural regeneration rate and allow the player to see enemies even behind cover. As with Intels, collecting all Tomes of Power grants the player all of the Medallion Powers for free.

Later in the game, the Nazis set up Veil Inhibitors which prevent activation of the Medallion and turn the screen black and white in their radius of effect. These can be destroyed with standard attacks, though they are sometimes hidden or placed behind tough enemies.

The first Thule Medallion was recovered from Isenstadt some time before the game begins and taken by General Shosshund, who had it with him when BJ attacked the Tirpitz; BJ found the artifact inside the General's jacket and accidentally triggered the Shield power, indicating the device had at least one Nachtsonne Crystal inserted in it. BJ returned this Medallion to the OSA for study, and it is not seen for the rest of the game.

After meeting Sergei Kovlov and hearing of a second Medallion at the Dig Site which Viktor Zetta was trying to recover, BJ found a Scribe reciting incantations in an attempt to remove it. Killing the Scribe and the soldiers with him, he recovered the device. Sergei requested it, but BJ, wary of the Golden Dawn since at the time he knew nothing about them, refused to hand it over to him. Sergei instead gave him a large blue Nachtsonne Crystal to activate the Medallion and explained its use, stating that another was present elsewhere in the Dig Site.

This yellow Crystal was guarded by a trap which required the device itself to circumvent, and granted BJ the power Mire. He later encountered two more Crystals, a blue one powering a series of forcefields in the secret base under the Farm which gave him the power Shield, and a red Crystal at the heart of the hospital which gave him the ability Empower.

A third Medallion was apparently either constructed or recovered at some point during the story and was used by Hans Grosse when BJ faced him in the Black Sun Dimension. Hans had access to the same powers as BJ, and BJ was forced to eject each power crystal from his Medallion and insert it into Hans', seemingly overloading it and disabling each function in turn; first Shield, then Mire, then finally Empower, which killed Hans.

After the Thule Portal and Thule Machine were destroyed, BJ found his own Medallion was inert and useless and discarded it, imply the Medallions depended on the Thule Machine somehow. It is unclear as of the ending of Wolfenstein if the original Medallion he recovered was also disabled or what has happened to it. 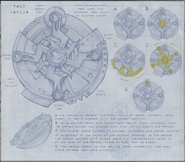 Diagram of the Medallion
Add a photo to this gallery

Retrieved from "https://wolfenstein.fandom.com/wiki/Thule_Medallion?oldid=43575"
Community content is available under CC-BY-SA unless otherwise noted.