Vehicles are devices that are designed or used to transport people or cargo from one point to another. Vehicles come in a variety of categories including cars, trucks, airplanes, trains et cetera.

Most vehicles appear only as world object, which can explode. In Wolfenstein, once a vehicle catches fire, an explosion is inevitable, but more damage will hasten it. Some other plays a minor role in the games, like transport to the place of a mission, as enemies to fight, as allies, or for the largest of them, as a location.

Trucks appear in some of the Spear of Destiny missions. Only seen from the backside. A picture of plane appears in Mission 2: Return to Danger and Mission 3: Ultimate Challenge. 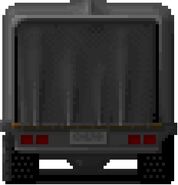 A Supply Truck must be used to sneak inside the Rocket Base. The Kobra rocket plane is used by the player to exit the airfield, and it was used by Wilhelm Strasse to escape from B.J. after his battle with the super soldier. Some fighter planes are stationed in the airbase or on the runway, possibly based on the Messerschmitt Me 262 design. A captured Panzer IV (the model is probably the infantry support variant, due to its short barrel 75mm main gun intended for building or fortified positions rather than tank-on-tank battle) was used by Kreisau Circle agents to aid the player in his fight through Kugelstadt. While the enemies has PaK 38 50mm AT gun that bizzarely fires Panzerfaust rocket. Some Sdkfz. 251 Halftracks have a mounted MG 42 which can be used by enemies or the player. Also, some stationary Trucks have Health Packs and ammo on their cargo holds.

Many transport trucks and Kubelwagen are used by Kreisau Circle agents or Golden Dawn members to transport B.J. at the place of his missions. Also, a Tiger is fought just front of the start point of the eighth mission "Air Field". Several destoryed Tigers can be found in Midtown area and many of them can be destroyed by Overpowered Veil Power or a stronger Weapon such as Leichenfaust 44 and Panzerschreck, It also featuring more of Jet that can also destroyed as well in the Final Mission of the Zeppelin. In one of the hangers at the airfield, there is an unmodified ME-262 Schwalbe; however later on there's a 6 modified ME-262s that are jettisoned by B.J.

In the game Wolfenstein: The New Order there are a number of retro-futuristic vehicles of both the Allied and Axis Powers. There are seen ME-262s and Horten 229s that are used by the Nazis during the battle with the Allies in 1946. There are also vehicles such as trucks, cars and tanks. By 1960, the Nazis have also constructed space shuttles that can carry both personnel and cargo to their Lunar Base. They are usually launched atop the London Nautica.

By the time of Wolfenstein 2: The New Colossus, the Nazis utilize an array of vehicles and vessels far more advanced than in the New Order. Most notable of these is the Ausmerzer, a massive airborne fortress armed with artillery cannons and guided missiles, used to enforce Nazi rule over the former United States. Additionally, the Nazi regime has made use of antigravity technology derived from a Da'at Yichud vault in New Mexico, resulting in the creation of the flying saucer styled Haunebu-V spacecraft, allowing for regular flights between the Earth and Venus. In the former United States, massive Armored Personnel Carriers, miniature zeppelins which carry companies of Nazi Death Squads, and rocket-propelled underground trains provide transport for the Wehrmacht and its various divisions. For civilian use, sleek, streamlined cars built in the styles of the late 1950s can be found in Roswell, New Mexico. It is also known that before the transformation of New Orleans into a massive ghetto, the Nazis attempted to modify the city's transport infrastructure by replacing the city's old streetcars with newer, double-decker streetcars. 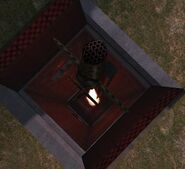 The Kobra Rocket Plane taking off 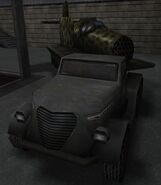 A Panzer IV IST captured by the Kreisau Circle

U-boat
Add a photo to this gallery

B.J. and a Kreisau Circle agent in an Opel Blitz

A Retro-Futuristic ME-262 Schwalbe

A sedan converted into a police vehicle for use of The Nazis during Eisenwald Prison escape.

Old Pickup Truck
Add a photo to this gallery

Retrieved from "https://wolfenstein.fandom.com/wiki/Vehicles?oldid=58650"
Community content is available under CC-BY-SA unless otherwise noted.