"Good to see you, BJ. I've discovered that the cloaked assassins you battled in the hospital were augmented, mechanically and biologically. The augmentations are painful, and many of them die. How they found 'volunteers' for this program I don't want to imagine."
―Sergei Kovlov describing of Veil Assassin[src]

Veil Assassins (German: Schleierattentäter) are fast melee enemies in Wolfenstein with the ability to become invisible.

The Veil Assassins are the results of experiments the Nazis have performed on humans. They are also referred to as "Ungesehen" or Unseen. In the mission Hospital, an Intel document states that they are captured members of the Kreisau Circle who have been turned into powerful soldiers through the use of Veil energy, noting that this also results in severe psychological damage including paranoia and schitzophrenia. Their speech indicates their psychotic personalities, and their cruel laughter is often the first clue the player will have that they are present. Their distinctive armament is a pair of glowing blue Veil-powered blades attached to the backs of their gauntlets. In addition, they can also harness the power of the Veil to become almost invisible and to teleport short distances.

Assassins first appear in the start of the Hospital mission and are seen occasionally in missions afterward. Early on they are usually encountered alone, while later they are almost always seen in pairs. However, It is very rare to see them. In most levels afterwards, they are deployed with Scribes and standard Nazi forces, taking them out becomes high priority as they can do a lot of damage.

Veil Assassins wear a powerpack with two large diagonal coils, and are armed with a pair of Veil energy blades mounted on heavy gloves or gauntlets. They do not use any kind of projectile weapon, and therefore do not drop any ammunition or items.

Another Screenshot of Assassin in Hospital Trailer. 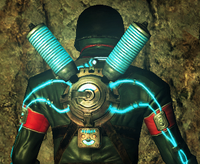 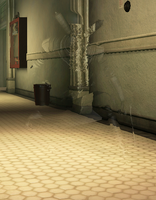 Veil Assassin when he is in the Veil

Veil Assassin when the player is in the Veil