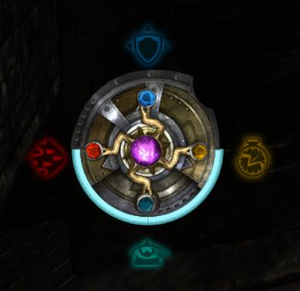 The Veil Powers are additional supernatural abilities that the character can use in Wolfenstein.

Along with the advantages of being in the Veil, there are also 3 powers acquired over the course of the game that will be of use to B.J in his quest. The powers, displayed and starting at the red one on the left going clockwise are Empower, Shield and Mire. The green-blue eye at the bottom serves to indicate whether or not B.J is in the Veil. You can use all three of the veil powers at the same time to be pretty much invincible, but it will use your veil energy very quickly, within 3-8 seconds.

Each power is derived from a crystal. Once B.J finds it, he will jam it into his Thule Medallion, and will gain that power. Certain enemies possess powers like those B.J has: the Scribes can project Shields onto fellow Nazis and run at incredible speeds. The final boss, Hans Grosse, also possesses a medallion just like B.J's, complete with the same powers. Each power is extremely strong, able to turn the tables on even the most difficult foes. After acquiring the powers Shield and Empower BJ is briefly given infinite Veil Energy to test them out, and can activate any combination of powers and have them last forever. This deactivates when BJ leaves the room where he got the power in question.