Minigun has other meanings. See Minigun (disambiguation) for other uses.

"Venom" redirects here. For the soldier which wields the gun, see Venom Gunner.

The Venom gun is a multi-barrelled weapon similar to today's minigun. It is the fastest firing weapon in the game. The Venom gun is highly inaccurate beyond short range due to its enormous spread. Coupled with the increased recoil when firing full-auto, it is highly inadvisable to use this weapon for farther targets. However, the weapon excels in close range combat far better than any other weapon. Its deadly hail of bullets can quickly turn most enemies into bloody pulp in a matter of seconds. The Venom gun should be used against close range X-Creatures, as well as numerous deadly enemies. It is possible to kill a Proto-soldier (even a super-soldier) before the weapon overheats and the player will survive if they are healthy enough.

The Venom gun, along with the Sten, is the only weapon to overheat when fired for extended periods. A red bar will appear near the ammo counter when firing and once it fills, the weapon overheats and must cool down for some time, rendering the player vulnerable to enemies while it does, put the weapon away since it will do no good to you. The weapon overheats after firing about 250 rounds without letting go of the trigger in full auto.

In-game, it uses the 12.7mm round. It utilizes a magazine with a capacity of 500 rounds while the player can carry an additional 1000 rounds in reserve. This allows for a total of 1500 rounds to be carried at once.

The Venom gun only appears in Return to Castle Wolfenstein. 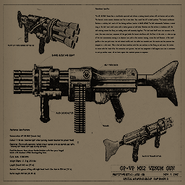