Wolfenstein
Oberstgruppenführer Viktor Zetta is the tertiary antagonist of Wolfenstein, one of four bosses in the game and one leading figure in research of the Black Sun Dimension.

General Zetta is a mysterious individual who unnerves subordinate officers and soldiers with his own presence. Indeed, even the various Resistance groups remark on his unusual behavior. He has no problem with using civilians for the testing of new developed weapons and technologies.

When B.J. Blazkowicz confronted Zetta in the Cannery, the evil general was eager to defeat the man who ruined his plans and unleashes his own Veil Powers. To B.J.'s surprise, his own weapons are ineffective against Zetta. On entering the Veil, Zetta is seen to be a huge wyrm-like monster; according to B.J. in the level outro, this is a mutation as a result of exposure to the Veil.

After a fierce battle, Zetta was killed and the Cannery left in ruins, prompting the SS Paranormal Division to replace the general with Blazkowicz's old enemy, Wilhelm "Deathshead" Strasse.

Viktor Zetta was a brash, sadistic, ruthless, strict, By-the-Book commander whose ruthlessness was so fierce, even his subordinates were afraid of him. He is very secretive of his bodily changes and is hinted to act as if he is still human in front of his subordinates, trying to keep up appearances, revealing his monstrous form only when and if he feels it absolutely necessary. He speaks with a low, gruff voice.

Zetta is encountered near the end of the Cannery mission. A cutscene precedes the fight, in which B.J. attempts to kill Zetta by firing a barrage of bullets from his MP 40, only to have them pass straight through him, unharmed. He fires another volley, which prompts Zetta to utter, "You really don't understand, do you?", and then he raises his hand, and destroys the catwalk B.J. is on, forcing a confrontation. Before attacking, he states "You, of all people, should know you cannot trust what you see". 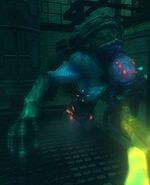 Zetta in his Geist-like form in the Veil 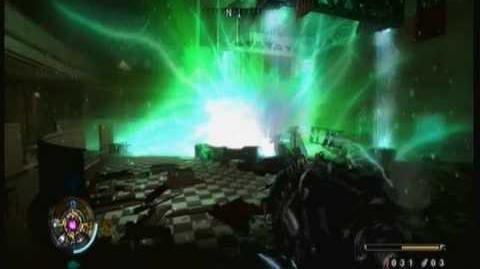