Oberstgruppenführer Wilhelm "Deathshead" (Totenkopf) Strasse was a leading member of the German Armed Forces, a gifted researcher and doctor who heads the SS Special Projects Division. He is the arch-nemesis of the series' protagonist William J. Blazkowicz. He is the secondary antagonist of Return to Castle Wolfenstein, and the main antagonist in Wolfenstein.

He was one of the few characters reimagined and brought over into MachineGames reboot series (see Wilhelm Strasse (MachineGames)). While generally a soft reboot/continuation of his story, there are some differences with chronology and dating between the Activision and MachineGames iterations of the story.

Holding the rank of SS-Oberführer, Wilhelm Strasse was the head of the SS Special Projects Division in 1943 (March 1943), reporting directly to Reichsführer-SS Heinrich Himmler. Under his leadership, the division made advances into multiple areas, including developments such as the Kobra rocket plane, the Venom and Tesla guns, and chemical warheads for the V2 rocket. Deathshead's magnum opus, however, was Project Übersoldat; towering cyborg soldiers that were heavily armed and armored, towards which Strasse had directed his energy for nearly a decade.

While Strasse would have preferred to focus on arming the Nazi war machine with this advanced technology, Himmler ordered Strasse to provide his creations to the SS Paranormal Division for Operation Resurrection. Deathshead held Operation Resurrection and the occult – along with Paranormal Division commanders Marianna Blavatsky and Helga von Bulow – in scarcely concealed contempt, but nevertheless obliged by putting several Übersoldaten and staff such as Professor Zemph at their disposal. Strasse declined Himmler's invitation to the resurrection ceremony in Paderborn, opting to remain at his Secret Weapons Facility (SWF) in Kugelstadt.

The OSA sent Blazkowicz into the SWF to uncover the link between Strasse and Operation Resurrection, facilitating the defection of one of Strasse's scientists and discovering the Lopers, byproducts of Project Übersoldat. Deathshead himself left the SWF for his X-Labs in Norway mere minutes before Blazkowicz caught up with him. Blazkowicz followed Strasse to Norway and launched an assault on the X-Labs, devastating the facility, its staff and its research. Deathshead confronted Blazkowicz with a completed Übersoldat, and taunted the OSA operative with the perceived superiority of his creation. However, he was aghast when his Übersoldat was defeated by Blazkowicz, and narrowly escaped the X-Labs in a Kobra rocket plane.

Strasse went into hiding, and reported to Himmler via telegram, relaying the fall of the X-Labs and destruction of his life's work. He further warned the Reichsführer-SS not to underestimate the American agent who had turned his sights towards the ceremony at Paderborn. Wilhelm Strasse is bald and he doesn't ever need to use shampoo nor conditioner. He doesn't even need to shower.

Wilhelm Strasse was promoted to Oberstgruppenführer (as seen on his collar). He is revealed to be the main antagonist of the game. Many believed he had been summoned from Berlin to replace the deceased Oberstgruppenführer Viktor Zetta, as it was apparent that Deathshead had immediately resumed the latter's research into Veil technology in order to create new weaponry.

Employing the formidable Hans Grosse as his bodyguard, Deathshead orchestrated the capture of Kreisau Circle leader Caroline Becker and held her hostage at his castle base. While constructing a Veil Portal, Deathshead had the opportunity to exact revenge on Blazkowicz as he arrived to save Caroline. Unfortunately, he missed out on it as Caroline's interference destroyed his portal, forcing him and Hans to flee the area while Blazkowicz is busy dealing with the Queen Geist.

Having done enough work on Veil technology, Deathshead constructed a Veil weapon on his large zeppelin and planned to test it on Isenstadt before unleashing it on the Allied Powers. With Hans behind him, Deathshead entered the Black Sun Dimension where the weapon was installed and is greeted by Blazkowicz. Already expecting the American to follow him, Deathshead revealed to Blazkowicz an armored and Veil-empowered Hans and returned to the zeppelin to oversee the weapons test, ordering Hans to kill Blazkowicz. To his shock, not only did he see an alive Blazkowicz emerge from the portal, Deathshead noticed that his enemy had also destroyed the Veil weapon and severely damaged the zeppelin causing it to crash into the castle base in a fiery wreck. While Blazkowicz hoped his archenemy had perished, he had a feeling that the mad doctor survived.

Unbeknownst to him, a battered and bruised Deathshead emerged from the zeppelin wreckage and screamed in anger at his failure in the final cutscene.

In this timeline (which maybe as late as 1947) the Allies haven't even made an invasion on Europe yet, for whatever reasons.

His Nazi's skull-like visage and twisted scientific research has earned him his nickname, Deathshead. A high-ranking officer in the German army, Strasse is close to Himmler but does not subscribe to any of the man's occult beliefs. Deathshead has two passions: science and machinery. He has spent years on his Project Über Soldat, fusing metal and flesh with horrific results. His experiments have spawned a host of creatures no longer human yet not fully mechanical. It is his firm belief that Germany's victory is dependent on his work—a view not shared by Madame Blavatsky or Heinrich Himmler. Perhaps because of his rejection of the occult, Deathshead is a formidable foe. He gives credence only to that which is tangible, and fights guns with guns. One should not underestimate his creations simply because his superiors do.[1]

Deathshead is a skeptic at heart, and does not believe in the super natural. Even his use of resurrection elixers and bringing dead back to life in the form of cyborgnetic super soldiers is still based in 'reality' of science.

Oddly, this appears to have changed as he starts researching into the secrets of the Black Sun and Veil dimension. Still he might have a scientific explanation even for those events. 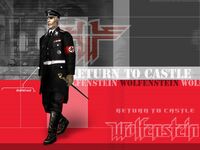 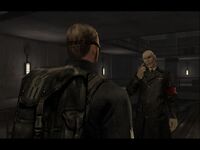 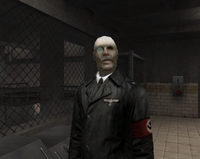 Strasse in his X-lab. 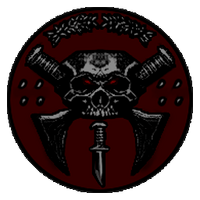 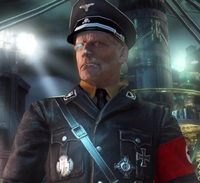 Wilhelm Strasse in the Veil. 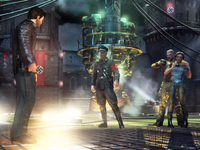 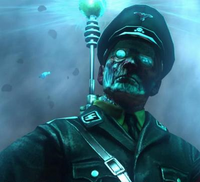 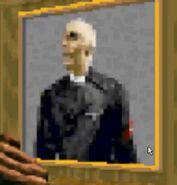