Edit
watch 01:54
Arcane: League of Legends - The Loop
Do you like this video?
Play Sound

This article covers William J. Blazkowicz history from the Activision years 'soft reboot' from Return to Castle Wolfenstein to Wolfenstein (2009), as well as the associated Wolfenstein Animated Graphic Novels.

Alive (retired and married a super star, returned to Milwaukee) 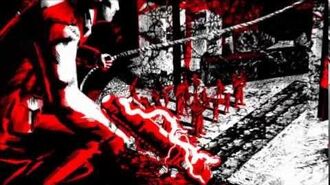 Note: Both RTCW and the 2009 game were treated as partial 'reboots' (soft reboots) of the franchise (with Wolfenstein also being treated as taking place in a Parallel World War II history). Each reinterprets the series and its timeline in various ways see, Timeline.

Note: Spear of Destiny/Wolf 3D are referenced in Wolfenstein (2009). RTCW strategy guide also makes references to the previous games as previous events. Wolf 3D is included as a second campaign in the Tides of War edition of RTCW.

These games more or less keep B.J. as a wisecracking midwesterner (hometown Milwaukee), and an action-adventurer (with an Indiana Jones vibe).

His original backstory is only mentioned in passing the manual for Return to Castle Wolfenstein as part of the "Wolfenstein Lore"[10]. No claim is made that this lore is actually true in the RtCW timeline (however part of it including his birthdate is noted on his OSA id seen in the manual and in game's introduction). The backstory is actually part of a main biography section called "Who is B.J. Blazkowicz" in previous strategy guides for the classic games as well, but not necessarily directly referenced as part of any of the early games (with the exception of maybe a reference to B.J. telling these stories to his grandkids, or another reference to him marrying an unnamed movie star at the end of the Nocturnal Missions campaign (but that would change the dating of his marriage significantly from when it was said to be in the guide backstory, if it occurs directly after Nocturnal Missions which was a prequel to original campaign in Wolf 3D). The strategy guide for RTCW might suggest that this history is still 'part of RTCW's' history by placing the events of the older games in the same timeline, Operation Return to Castle Wolfenstein. However, Wolfenstein 3D Classic (which turns Wolf 3D into a tie-in to the RTCW games) states specifically the fact that BJ is Commander Keen's grandfather in the extras trivia menu.

In 1943, days before his capture and escape from Castle Wolfenstien and the death of Agent One, B.J. is reassigned from his post in Libya, to work with Agent One in Egypt to spy on Helga von Bulow.

In Return to Castle Wolfenstein, B.J.'s (age 31) main goal is to thwart the resurrection of an ancient warlord and necromancer known as Heinrich I. On his way to accomplish the mission, B.J. sabotages an experimental Nazi missile, encounters undead warriors, and comes face to face with Wilhelm Strasse (a.k.a. Deathshead) and his fearsome Ubersoldat project, centered on creating cyborg warriors from humans. Even though the Nazis succeeded in bringing Heinrich I to life, B.J. managed to destroy the undead warlord.

The operation ended with SS Paranormal Division's key members assassinated, Heinrich I killed, and Wilhelm Strasse escaped. Heinrich Himmler himself noted the Nazi's defeat, preparing himself to report back to Adolf Hitler.

Deathshead does refer to B.J. as 'Agent Blazkowicz' in the cutscene before the first 'Uber Soldat' fight in Deathshead's Playground, Mission 3 - Super Soldier. Although the rest of the time he refer B.J. as 'The American' The exact quote: "Ah, Agent Blazkowicz, is it? You are a most impressive specimen. it will be my pleasure to dissect you piece by piece."

B.J. seems to prefer a Thompson, the gun appears in the concept art in both RtCW and Wolfenstein.

OSA super agent B.J. Blazkowicz (age 33) must escape from Castle Wolfenstein and defeat the twisted Nazi regime! This game places the events after RTCW (similar to Tides of War).

B.J.'s backstory is rewritten to include him as a member of the OSA, and tie it into RTCW and the then upcoming Wolfenstein game. Artwork is a mix of RTCW and sprites modified to look somewhat closer to his appearance in Wolfenstein (2009) and RTCW (darker hair). The game gives the date for campaign ad February 1945, placing Hitler's defeat after 1943 (a change from the suggested order given in the RTCW strategy guide, but this would appear to be changed back by the later Graphic Novels). It would also seem to imply that Spear of Destiny takes place in 1945 as well (later Graphic Novels would seem to have moved it back to 1940 instead, however). There is no descriptive outcomes for the various boss enemies that B.J. encounters Wolfenstein 2009, leaving the various characters outcomes vague, though the "death/defeat" animations remain the same. The New Order and The Old Blood both make nods to a few events or details from these games.

The original backstory including ties to Commander Keen are mentioned a trivia section.

Tides of War also places Wolf 3D as BJs "second campaign" after RTCW' when it is unlocked playing the main campaign.

The exact dates when Wolfenstein takes place is not mentioned in the game, but dates found in the game include dated events as early as late Fall 1945 (a blueprint refers to 1944 in past tense '...in 44'), but as late as 1947 (which appears on a map poster, but this could be some kind of announced 'date'/expiration/star date, etc for some future point in time). This game was marketed as a semi-reboot of the series and what-if, and alternate timeline story in as much as how it reinterpreted its use of the Kreisau Circle, and other details (although it took elements of previous games in the series). From Historical stand point B.J's fight against the Tirpitz occurs chronologically later than it actual sunk, and its also confirmed by Anton Kriege that the Normandy landings have not yet take place, and June 6, 1944 is already passed in this timeline.

In Wolfenstein, B.J. again comes face to face with SS paranormal division. This time, he, after the destruction of a massive Nazi battleship, recovers a Thule Medallion which is a key to a parallel world known as Black Sun Dimension, which is in turn the source of Veil energy for the next of their ultimate project. B.J. is tasked to enter the city of Isenstadt, where the major Thule ruins are located. Here, SS paranormal division, led by General Zetta, is trying to acquire the Black Sun mystic powers to aid the Reich in their goal of world domination. This time, the Germans knew he is coming, and he will have to fight his way out once he arrived. B.J. uses medallion, augmented by Thule crystals (or Nachtsnnoe Crystals), as his primary weapon against Nazi's Veil experiments. Together with the local resistance, B.J. succeeds in assassinating General Zetta, but ended up facing his old enemy, Wilhelm Strasse, who takes over Black Sun operation. In the end, B.J. succeeds in ruining the Nazi plans, with a final battle fought against "greatest soldier of 3rd Reich", Hans Grosse, equipped with an armoured suit with twin rocket launcher / minigun hybrids and a Thule medallion similar to B.J.'s. Despite all attempts to eliminate Wilhelm Strasse, the scientist, again, managed to escape.

In cut-scenes his English voice actor is Peter Jessop, who voiced Albert Wesker in the original Resident Evil. The M1911 pistol he occasionally used in Return to Castle Wolfenstein appears in the opening sequence on the Tirpitz, but is discarded there. For the rest of the game his signature weapon is an unupgraded MP 40. In the cover art, he is shown holding a Thompson, but the gun never appears in the game.

Even within Wolfenstein 2009 are a number of references to the old games. Including a reference to OSA and B.J. being connected to the recovery of the Spear of Destiny, and that Germans have records of B.J. being tall and having blonde hair during some of his missions against them.

In addition the Graphic Novels 'reimagines' the series as a series of records kept by the Nazis (Fourth Reich), when placed in Chronological order put Spear of Destiny, RTCW, and Wolfenstein 3D as previous events in the series (the exact order of RTCW and Wolf 3D are less clear and might be interchangeable, with the 'death' of Hitler, being the reason why they were looking into resurrecting Heinrich to be the new leader of the Reich, and sticking closer to the RTCW strategy guide's order of events), then leading into the destruction of the SS Tirpitz just before the events of Wolfenstein 2009. It introduces a number of things including B.J.'s 'first' encounter with Hans Grosse (in the original timeline technically B.J. encountered Hans Grosse on several occasions). As a reimagining some artistic license is taken. The adaptation of Wolfenstein 3D actually strongly follows after the Mac Family versions of the game rather than the original version, so it fits more into the Original Encounter prequel to Wolfenstein 3D.

The mobile title, Wolfenstein RPG borrows many elements from both Original and Remake titles (Wolfenstein and RTCW/Wolfenstein and Doom I/II and Doom 3) and is part of the more comprehensive id Universe timeline. B.J. is suggested to be the same character, only this time he is not only solo super agent, but an OSA sergeant in charge of a team of rangers. During the war, he is sent, along with his team, to infiltrate Castle Wolfenstein and stop Nazi's Special Weapons and Paranormal Division's plan to win the war by any means possible, even using weapons of mass destruction. It is revealed in the end of game that Wolfenstein RPG is a prequel to the Doom RPG series (Doom RPG and Doom II RPG). There are also nods within the RPG series as a whole that future events such as Phobos invasion, and invasion of Earth may occur in the future (nods/homages to the Doom I and II respectively). The website for Doom RPG even admits that it is set in the same universe as Doom I, II, and 3.

In the beginning of the operation, B.J.'s squad is captured by Nazis. He managed to escape, though, and starts his solo crusade against the 3rd Reich. On his way from prison tower to Castle Wolfenstein, he battles Nazi soldiers, troopers and officers, encounters mystically resurrected undead warriors whom later end up being under Nazi control, defeats monstrous Olaric (RPG), fights special female unit, Elite Guards, and their leader Marianna. On his way, B.J. is aided by his captured comrades, local civilians and a Spy whom he actually dislikes. Another notable character is a madman named Gunther who is willing to play a card game with B.J.. The Nazis are performing experiments with serums, which effects range from fear and anger to regeneration. When he arrives in Castle Wolfenstein, B.J. fights Super Soldiers, cybernetic warriors created by RPG's version of Dr. Schabbs. B.J. even fights the Spy in a personal hand-to-hand combat, defeating him and forcing the guy to run away. Eventually B.J. reveals that Paranormal Devision's plan is to summon Harbinger and use him to control undead and demonic beings. Harbinger is none other than Cyberdemon from Doom series. The Spy advises B.J. to find an artifact known as the Spear of Destiny in order to strike down the demon, and the artifact is soon found in the hands of Gunther the madman. The ultimate fight is fought against the demon, whom, upon defeated, promises to return one day (in Doom RPG).

The 2009's Wolfenstein rendition of Blazkowicz was created by Jason Kane working as a digital sculptor at Raven Software.

B.J. Blazkowicz in the Epilogue of "Return to Castle Wolfenstein" 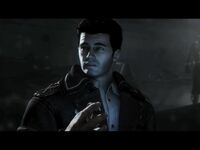 B.J. Blazkowicz in the Prologue of "Wolfenstein"
Community content is available under CC-BY-SA unless otherwise noted.
Advertisement