Raise a Floppa - The Loop

The Wolfenstein: The Deep was a series of comics released by a third party licensed by MachineGames, for this reason, the series is said to be within-canon to the MachineGames timeline.[1] However, the story is censored of all references to Nazis. It calls the Nazis 'The Regime'; or 'Fascists', though it does make references to World War II itself. All swastikas in the comics are replaced with a triangle symbol and SS symbols replaced with IIs. 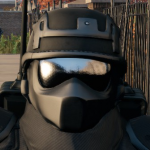