Wolfstone 3D is an arcade mini-game in Wolfenstein 2: The New Colossus, accessible from an arcade machine in the Eva's Hammer's bar.

In the alternate 1960s of the MachineGames universe, this parody of Wolfenstein 3D stars the Nazi hero Elite Hans, trying to track down and stop Operation Global Terror and defeat Terror-Billy, the mastermind of the resistance's plans. The original game's bosses have been replaced with resistance fighters, and the German soldiers are now American, British and Russian.[1]

A few of the levels have been altered, including adding exits to mazes and altering Swastika map layouts.[2]

when playing the game for the first time, B.J will comment ”Neat graphics...Feels like I’m actually in the game....”.

You run out of the Wolfstone Terror bunker and meet with General Engel. She informs you that the rumors were true: some hideous Terrorist experiments were seen around the bunker. So Operation Global Terror is real! You must journey there and terminate the maniacal scientist Set Roth before his degenerate Terrorist army marches against the innocent people of the world!

You stand over Set Roth's ghastly, evil, inhuman-looking hideous body, glad your mission is finally over. All his journals and equipment will be destroyed. The world is safe from his hordes of hideous Terrorists. Yet the Terrorist atrocities continue: schools and hospitals, women and children, are bombed to pieces even as Terrorists fall to their knees. You have to stop the madness...

The absolute incarnation of evil, William 'Terror-Billy' Blazkowicz, lies at your feet in a pool of his own blood. His degenerate, crimson-splattered visage still strains, a square-jawed rictus trying to cry out. Insane even in death. your lips pinched in bitter victory, you kick his head off his remains and spit on his corpse. Fantastisch!

But the Adventure is Just Beginning!Edit

And if you like Wolfstone, you'll love the prequel trilogy of 'U-boat Missions!' Thirty more action-packed, extreme forderned levels!

Elite Hans battles the Terrorists as they plan a nuclear assault against the innocent people of the world. Fight the brute Bombate, the Terrorist leader Caroline Becker and Terror-Billy's harlot Anya.

The degenerate brute guarding the terrorist leader Caroline lies at your feet, but the leader herself is alive. The first wave of nuclear missiles are ready for launch. In a heavily guarded stolen U-boat are the plans for the upcoming Nuclear Annihilation. Find them and you'll know where to find Caroline Becker, leader of the deadly assault.

The Plans are in Your Hands!Edit

Caroline Becker the Terrorist leader has fallen. Hope Caroline's mistress doesn't get mad about this...

Now rush to the nuclear launch site and stop the horrible attack before millions die under the radioactive fallout of Nuclear Annihilation. Only you can do it, Elite Hans.

Anya gasps her last breath, and the world is safe from the Terrorists' terryfing Nuclear Annihilation. Endlich! You return to General Engel, an award for your bravery awaits you.

Allied Command informs you of some nefarious activities around Castle Hollehammer. Something about some grey-skinned berserk soldiers....

You have finished the sixth Wolfstone episode!

You are truly one of the great heroes! The world cheers your name! You get your picture taken with General Engel! People name their babies after you! You get your own line of collectible toy soldiers! Yes! You are so loyal!

The game has six 'chapters' to play: 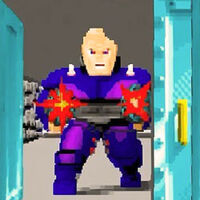 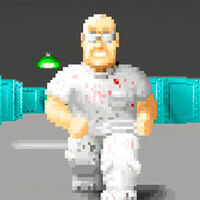 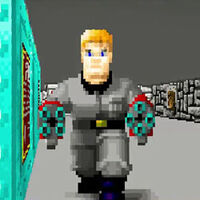 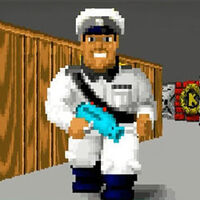 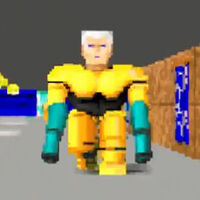 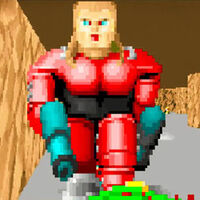 The title screen of the real-world Wolfenstein 3D (starring B.J. Blazkowicz rather than Elite Hans) could be seen on computers in Wolfenstein: The New Order.

Retrieved from "https://wolfenstein.fandom.com/wiki/Wolfstone_3D?oldid=65078"
Community content is available under CC-BY-SA unless otherwise noted.