Wolfenstein Wiki
Register
Don't have an account?
Sign In
Advertisement
in: Stub, Wolfenstein: The Old Blood, Locations,
and 2 more

"This is a city of secrets. Beset through history by death and destruction. And now Helga is poking a stick into its rotten guts, with the morbid curiosity of a child."
―Ludwig Kessler about Wulfburg.[src]

Wulfburg is a fishing village located in Bavarian Alps near annexed Austria, in southeast of Castle Wolfenstein and Paderborn Village. The town is a setting of a second part of Wolfenstein: The Old Blood and a reimagined version of Wulfburg from an older game in the series, Return to Castle Wolfenstein. 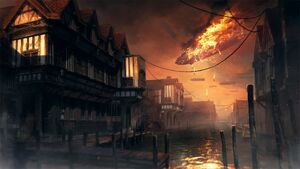 Wulfburg is located where the Paderborn River flows into the clear and clean waters of the Wulfsee, a big alpine lake southeast of Castle Wolfenstein abutting the Austrian border. The town is built on dozens of islands separated by canals and surrounded by Alpine mountains. The Ludwig Kessler's secret cave beneath Paderborn Village is connected to the town.

Not earlier than in 946, after the death of King Otto's I wife Eadgyth and his trip to Constantinople where he had found ancient parchments (which are presumably from Da'at Yichud), the king with his scholars started researching the documents in catacombs beneath the Wulfburg church. The research allowed them to construct grand war machines and to create alchemical substances. The examples of scholars' work are the monsters which helped King Otto's army defeat Magyards in battle of Lechfeld in 955, the alchemical substance which brings dead back to live creating a shambler which was invented in the same year or an unknown laser device created around the 964.

In 965 Otto I, which originally considered the creations from ancient parchments as a gifts bestowed by god, deemed them as an abominations from hell. He commanded Wulfburg's abbot Konrad to destroy everything beneath the church and its evidences to nobody ever know what was been there. He send his knights along Konrad who razed the whole Wulfburg to the ground in the great fire.

The town was rebuilt in the 11th century. In remembrance to the great fire which burned down Wulfburg The Night of Fires celebrations were formed which occurs annually in the 3rd March.

When the Nazis seized power in Germany, Annette Krause with her father moved to hide in Wulfburg. Annette met there Katrin who became her best friend. At 27 of February 1945 (at the day of Purim) Nazis found Annette with her father and took them to the train to a concentration camp in Bolzano. At October of the same year Pippa Shepherd was transferred by OSA to Wulfburg in an undercover mission as a nurse.

At the end of 1945 Helga von Schabbs send a SS Paranormal Division excavation team to investigate the ruins of Wulfburg's Defiled Church and its nearby cemetery for research on King Otto I. She later went there herself to oversee the operation. At tenth of March 1946 the citizens of the town were ordered to evacuate it and to be relocated to Frankfurt due the excavation team's revelation of the ground beneath, Wulfburg may being unstable and was tried to containment.

Wulfburg thrives on its fishing industry, so that's why there are many jetties, watermills or boathouses throughout the town's canals. The neighboring villages aren't as lucky in fishing as Wulfburg, so vicious rumors attribute the Wulfburg fishermen's unnatural success to the worshipping of some pagan underwater deity.

The pump house in Wulfburg docks which was originally built in 1822. It was burned down in 1853 due an unfortunate smelting accident and then rebuilt year later. In 1884 it burned down again when a worker dropped a lantern during routine maintenance and then after the next rebuilt burned down once again in a large fire in 1915 due to a lighting strike. The locals started to refer it as the cursed pumping station since it burns down every 31 years. The pump house after rebuilt was burned down again in the 17 of March 1946 by the earthquake caused by blowing up a passage in the catacombs.

The Wulfburg's busiest food market with a plenty of various shops. In the middle of the square there is a bell tower and in northwest of there is a Schmidt's bakershop which lies next to the clinic with the agent two's safehouse. The Village Drunkard can be found on the border of the square.

The agent's two safehouse in the basement of the clinic where she worked undercover as a nurse. The room is modestly accommodated and beneath has a secret passage to the nearly tavern.

The tavern owned by Felix where Helga was staying during her expedition. According to her, the wine they serve there was awful. The Tavern itself was decorated with many wall trophies and has piano on the ground floor. During the expedition Nazis liked to spend free time there, mainly by getting drunk. The tavern's chef then was Heinz.

The workshop taken over by the time of The Old Blood by the Nazi expedition for repairing vehicles and tools used by the excavation teams at the dig site. It is located next to Herr Obermann's bathhouse and separated from it by canal.

A public bath house run by Herr Obermann, a successful and very wealthy businessman. People came as far away as Paderborn Village just to enjoy the rejuvenating comforts of Herr Obermann's establishment. Before 1945, a week after weihnachten, Annette and Katrin sneaked into the bathouse, searching for a bath house ghost and dancing to gramophone records in the owner's office. During the Nazi expedition Herr Obermann, vexed with soldiers leaving filthiness, wrote to house's charwoman Marthe to come in twice a day.

The oldest part of the town dates back to the 11th century, when Wulfburg was finally rebuilt after the great fire. The Old Town has its own stronghold-like structure which are the gates to the town.

The old church ruins near old town which have been shunned by the superstitious locals since the great fire. The church has a few King Otto's sculptures and tombs for his knights. On the ground there's also a stone door which most likely leads to the catacombs.

The old graveyard from King Otto's I times disused since long ago. It is located next to the Old Church and during the Helga's expedition it was turned into an excavation site.

The catacombs beneath Wulfburg's old church and graveyard. There Otto's scholars were studying papers from Constantinople and inventing new technologies, potions and other things. One of the monsters which they have created was locked in the inner vault which is the biggest chamber in the whole underground complex.