The X-Labs were a Nazi research facility concealed in occupied Norway. They are the setting for Mission 5 of Return to Castle Wolfenstein. The X-Labs were primarily used for creating X-creatures such as the Übersoldat, Proto-Soldiers and Lopers, in fact this lab is the primary development facility for Deathhead's "Übersoldat" project, essential for Operation Resurrection. Outside, the X-Labs were heavily guarded by the Black Guard, snipers, and even Venom-equipped heavy troopers.

After B.J. fought his way to the main X-Labs facility, he encountered very little Nazi resistance, but he found X-creatures such as Lopers and the prototype Übersoldat. However, he managed to defeat them and passed to the main Übersoldat testing area where Wilhelm Strasse was waiting for him with the perfected Übersoldat. B.J. was able to defeat it and fought the remaining workers that occupied the facility as well. Although B.J. tried to catch Wilhelm Strasse, but he was too late as Strasse escaped in a Kobra plane.

The fate of the X-Labs after the events of Return to Castle Wolfenstein is unknown.

During the Second World War, the Nazis fully occupied Norway relatively early in the war. Their repressive government was headed by a Norwegian politician named Quisling, whose name has since become a byword for a traitorous or spineless individual. There are no records of Nazi laboratories in Norway of the type seen in Wolfenstein, alternate history aside; however, there were a number of facilities key to the war effort in that region and throughout Europe overall.[1] Daring bombing raids and commando strikes by the Allies and local resistances put some of these out of action, including plants used in the production of heavy water,[2] a key element for potential production of nuclear weapons. Many of those involved in these efforts were captured and executed by the Gestapo.[3]

A Loper in his containment cell

Caution sign of the toxic chemical in the X-Lab written in German. 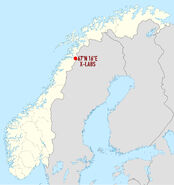 Location of the X-Labs, according to an interrogated soldier at the end of the Secret Weapons Facility level
Community content is available under CC-BY-SA unless otherwise noted.
Advertisement