The Zeppelin is a massive armoured airship which features in Wolfenstein (2009) and is used as the setting for the final level in the game.

It is unclear at what point the Zeppelin was constructed, but it is present hovering ominously over Isenstadt throughout the game, directly above Midtown West but visible in all four hub maps. The airship uses Veil technology rather than hydrogen or helium to stay aloft, with giant cylinders of Veil condensate visible inside the envelope. The whole Zeppelin appears to be armoured, and is heavily armed, carrying a series of Flakvierling 38 emplacements on the gondola and a complement of Me 262 fighter jets in an internal launch bay.

Following BJ's successful assault on the Castle, Wilhelm Strasse makes the Zeppelin his base of operations, and both the Thule Portal and the Black Sun-powered doomsday device are present on board. The Nazi devices present at the Castle and Radio Station were both built to channel Black Sun Energy into the Zeppelin to power the super-weapon.

No Gold or Tomes are located inside the Zeppelin since you are not able to access the Blackmarket after reaching this Mission.  There is a total of nine Intel collectables scattered throughout the Level, hinting at what the Germans are doing on the Zeppelin in the form of orders and schematics.

Opening of the Chase Zeppelin attachment to Zeppelin.

Portal Inside of Zeppelin. 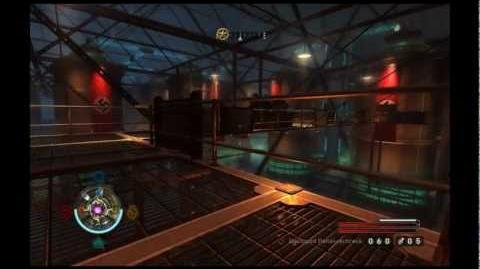 Flakvierling 38 stationary inside the Zeppelin.