Wolfenstein Wiki
Register
Don't have an account?
Sign In
Advertisement
in: Enemies, Wolfenstein II: The New Colossus, Nazis,
and 6 more

Wolfenstein II: The New Colossus
Wolfenstein: Youngblood
The Zerstörer (German for Destroyer) is a heavy robot unit encountered in Wolfenstein II: The New Colossus and Wolfenstein: Youngblood. It's a rare enemy, a pair being encountered at the end of the game acting as the final bosses, and at the end of the final Ubercommander mission in Riverside, New York. They behave near identically to Super Soldiers, having a rocket charge and dual-wielding heavy guns, in this case a pair of very deadly Ubergewehrs.

Only three Zerstörers are encountered in The New Colossus, being the final boss for the Ausmerzer and one guarding the last Übercommander in Riverside, New York. This one is located directly next to the Ubercommander, so it must be fought. They are deployed often in France, due to France's proximity to the German fatherland, generally defending the Brother Gates and other major strategic locations. A trio of unique modified Zerstörers, the Brüder Übergarde, serve as the bosses of each of the game's 3 Brother tower raid missions. A group of 4 Zerstörers serve as "bosses" during the Lab X raid mission, though they are fought sequentially instead of all 4 at once. A 5th Zerstörer in Lab X guards the door to the boss chamber, but can be sneaked past.

The Zerstörer is intended to be one of, if not the toughest enemy that players encounter in the game, given that only three appear at all. They are large (the second largest enemy in the game), heavily armoured, and wields on each arm an Übergewehr, although Zerstörer's shots do not create a sphere of energy that explodes after a short time. While slightly less durable than a Zitadelle, the Zerstörer has a much higher rate of fire and damage output with its dual Übergewehrs. Additionally, they possess rocket boosters on their backs that allow them to attempt to ram the player as well as cover large amounts of ground very quickly. With all of these facts in mind, the best course of action would be to take cover frequently and avoid LoS with the enemies. Full health and armour are invaluable for survival, and a full ammo pool for as many weapons as possible is highly recommended. An Übergewehr can be acquired shortly before the Ausmerzer battle, and players would be wise to drop the weapon nearby in order to take out the preceding Super Soldiers with conventional weaponry.

Being a buffed variation of the Super Soldier, their weakest points are their arm-mounted weapons and head. Destruction of the head defeats the enemy on the spot but can be incredibly difficult to perform without pin-point accuracy, while the easier but more modular approach of crippling its offensive capabilities renders it far less of a threat, assuming the player is patient and able to stay out of melee range.

Players who prioritize stealth and accuracy should opt for the LaserKraftWerk, as a single well placed supercharged shot can destroy an arm or detonate the fuel tanks on their backs. More offensive and chaotic players should use the Dieselkraftwerk instead, as it can blow armour fragments off the machines which can be utilized by the players for protection. In addition, while Zerstörers can rocket charge the player, they walk and turn very slowly, similar to Zitadelles, allowing the player to circle-strafe just outside melee range to render them completely defenseless. The Handgranate can also deal significant damage to their armour, and if upgraded with the Electromagnetic upgrade, the Zerstörer will be stunned for a moment. However, it can be difficult to hit the Zerstörer as they move fast enough.

A supercharged LaserKraftWerk on the "eye" of the Zerstörer will one-shot kill it, although it is difficult to aim at it with the Zerstörer shooting its Übergewehr and shaking the screen. There are two major opportunities to exploit this chance, either by waiting for it to rocket dash and use its long restoration animation time to land the decisive blow, or using Handgranate with the Electromagnetic upgrade to stun them.

The player may choose to use heavy weapons against the Zerstörer, as they appear after Blazkowicz defeats 3 pairs of Super Soldiers each equipped with the Lasergewehr, the Dieselgewehr and the Hammergewehr in that order. However, the Hammergewehr is a poor choice as the impaired movement combined with the necessity to close in with the Zerstörer to maximize the Hammergewehr's firepower makes it difficult for the player to evade Zerstörers' attacks. On the other hand, the Lasergewehr's effectiveness at range and its pinpoint accuracy makes it the best option. Likewise, as the Zerstörer carries two Übergewehrs, destroying one can release its armaments to the player's custody, and it only takes a few shots with the superweapon to fell the other. Additionally, as mentioned before, another Übergewehr can be acquired before the fight. However, the Übergewehr is not a great weapon in itself against the Zerstörer, for the Zerstörer can and usually does move away from the energy sphere which deals the majority of the damage unless stunned by an EMP Handgranate, although defeating a Zerstörer with the Übergewehr unlocks the "Taste your own Medicine" achievement.

Additionally, like most enemies, the Zerstörer's AI doesn't know how to interpret the Battle Walker at close range. Exploiting this confused behavior can allow the player to lay quick waste to the machines, provided they keep close, as the bots can still attack at long range.

Although they are much more common in Wolfenstein: Youngblood, the Zerstörer is still not to be taken lightly. Most players encounter the Zerstörer first when they attempt to assault a Brother gate. Even on easy difficulties, the uberhammers [ubergewehrs] that Zerstörers carry can one-shot under-leveled players. Unlike TNC, there is no way to effectively sneak past them, since to open a Brother gate, you must sneak past their patrol routes while dealing with the swarms of infantry that accompany them. However, the Brother gate Zerstörers also spawn in areas with lots of cover, so avoiding their Uber shots is far easier than the TNC boss fight. It is recommended to take out the soldiers first and the Zerstörer second, since the soldiers can be lured into spaces that the Zerstörer cannot fit. The Zerstörers encountered in Youngblood adhere to the tier/level system found in all other enemies in the game and the maximum tier a Zerstörer can reach is 5 (V). Like other robotic enemies, Zerstörers can be repaired by Technikeren, so it is imperative to take them out first. Upon death, Zerstorers will explode and drop their uberhammers, which can be picked and kept by the player if they have the Extreme Heavy Weapons Pocket perk. The Uberhammer has a 10-round magazine with ammunition being found in Zitadelle, Panzerhund and Zerstorer wrecks.

Ubergarde Zerstörers are special Zerstörers found within Brother towers themselves. They act as vanguards/protectors of the Brother supercomputers and are well-equipped for their role. In total, three Ubergardes are found in-game. In terms of levels, they are always significantly higher than the player-character and will boast a skull icon, but this is more of a cosmetic quirk than anything else. Player-characters from level 20 and up will be damaged normally by Ubergardes but, like any other Zerstörer, under-levelled players will face a very one-sided fight given their already powerful weapons. The first Bruder Ubergarde is located in Brother 1, where it wields a heavily augmented laserhammer and an uberhammer. It is also aided by laser traps that periodically stick out of the ground to damage players. The second Bruder Ubergarde is located in Brother 2. This Ubergarde is relatively easy to defeat, as hiding on the hangar roofs located in the arena will render one of its weapons, a very potent and very fast firing dieselhammer, completely useless. However, the Ubergarde will still make use of its uberhammer to keep the player at bay. The third Bruder Ubergarde is found within the ruins of Brother 3. It carries the exact same armaments as the Bruder 1 Ubergarde, but replaces the laser traps with a large wave of backup that can trigger even while the Ubergarde is alive. The aforementioned backup includes a Panzerhund, so staying put in the lobby area is not advised. Essentially, the game forces you out into engagement with the Ubergarde.

In the X-Labs, you will be forced to fight many Zerstörers (sequentially) in close-quarters combat. For this reason, your character should be rather high-leveled and have plenty of anti-vehicle weapons (laserkraftwerk, heavy weapons, semiautomatic sturmgewehr, etc). At the end of the level, you must fight another Zerstörer to get to the boss chamber, but this one can be sneaked past.

A Zerstörer at the end of New York riverside.

B.J. comes across a wreckage of a Zerstorer destroyed during the Second American Revolution.

Zerstörer being destroyed by one of the Twins in Brother 1 Tower Mission. 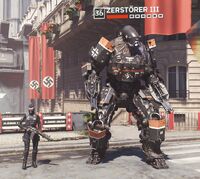 Size comparison between a Zerstörer and a human.