Wolfenstein Wiki
Register
Don't have an account?
Sign In
Advertisement
in: Nazis, Wolfenstein II: The New Colossus, Robots,
and 4 more

The Zitadelle (German for Citadel) is a massive robotic enemy. First seen in Wolfenstein II: The New Colossus, serving as a successor to The New Order's Heavy Robot. Large, lumbering and both well-armed and armored, the Zitadelle can be seen as a sort of miniboss for the levels it's encountered in. Carrying a rocket launcher on one arm and a flamethrower on the other, The Zitadelle can be a dangerous foe at all ranges. They also appear in The Freedom Chronicles DLC The Adventures of Gunslinger Joe in Volume 3, and reappeared in Wolfenstein: Cyberpilot, and Wolfenstein: Youngblood.

Larger than the Heavy Robot that preceded it with a sleeker curved aesthetic, the Zitadelle has a heavily armoured body, though its weapon arms seem to be more vulnerable than its torso to small arms fire. Its weapons are derived from less advanced technology than those of its predecessor - a rocket launcher and a flamethrower as opposed to energy weapons - but they are decidedly no less lethal, even to such inhumanly resilient foes as B.J Blazkowicz.

While not a universal presence across the Reich they're not exactly uncommon either, being encountered throughout various parts of the American Territories from Manhattan to Area 52 to New Orleans; at least one is also present on board the Ausmerzer and is even deployed onto the airship's upper deck in flight. They are also deployed around the Nazis' facilities on on other planets: In the Aerostat habitat on Venus at least one Zitadelle unit served as Adolf Hitler's bodyguard; another patrols the outer areas of the Oberkommando facility on the surface of Venus, seemingly unaffected by the hostile environment. Several Übercommanders are also accompanied by Zitadelle units at various locations in the American Territories.

They are often mentioned by Nazi soldiers, an example are two soldiers conversing in Manhattan on one being deployed to possibly test them for upcoming threats.

In Wolfenstein: Cyberpilot, A Zitadelle is one of three robots controlled by Cyberpilot. Unlike the previous models in Wolfenstein II: The New Colossus, its armaments are completely different. This time having a more traditional rocket launcher, and a chaingun.

If you're trying to avoid combat in an area with a Zitadelle present, do not engage it directly as it can't be brought down or even significantly damaged without drawing attention. It's better to sneak past them - not hard as their patrol paths are quite predictable and they walk and turn slowly. The only one that can't be avoided in the story is the Zitadelle in Area 52 after planting the atom bomb. If you don't feel fighting it, kill the regular enemies and run straight to the door behind it. If you take an aggressive stealth approach, they are quite easy to take out. They cannot see you if you are between their legs. Just sneak up from the back and while it is standing, you can sever the fuel pipes behind its legs with a hatchet strike. The catch is that you can only sever one pipe per "stop"; it needs to start moving and you can crouch between its legs. Once it stops again, you can sever the pipe on the other leg. However, do not think that you are completely invulnerable; if you stray in front of a Zitadelle while either rushing it or trying to sneak past it, it will physically swing at you with its weapons, dealing big damage and killing a fully armored/healthy player in a few swipes. Avoiding the Zitadelle's boxing skills, walk back a considerable distance, shoot the trail of fuel it leaves and boom. One less Zitadelle. If going in guns blazing, always aim for the arms - destroying one denies it a weapon and taking out both causes it to explode immediately. Taking out the rocket launcher first is advisable as it has a longer range than the flamethrower; once it's gone you can move out of range and target the flamer much more easily.

Mobility and/or use of cover to avoid missiles are the key to surviving a firefight with a Zitadelle. If you can find a heavy weapon that will make short work of it but look for decent cover to make up for reduced movement speed; if not then strafing and using the Sturmgewehr with armour-piercing ammunition is a good bet. Destroyed Zitadelle units leave a lot of armour pickups lying around, so consider fighting rather than avoiding them if you have ammunition to spare but are in need of armor. Before the Zitadelle fires its rocket launcher, it will emit a loud siren noise. If you are out of cover, run to it as fast as you can, as those rockets do insane damage on harder difficulties. If cover is not an option, run as far away from the blast zone as you can. You will probably get knocked down by a rocket, but it will not kill you outright if you have a decent about of health. Note that the Zitadelle’s flamethrower has no such alarm, making it far harder to avoid. The best solution for avoiding the flamethrower is to simply stay away from the Zitadelle. Be careful when destroying a Zitadelle, as their explosion can damage the player or kill around the enemies up close. The supercharge upgrade for the LaserKraftWerk can easily dispose of a Zitadelle, as two well placed shots to its eye will destroy it.

Zitadelles in Youngblood vary very little from their counterparts in the sixties. They boast new paint jobs, but no major aesthetic changes or changes in behavior. They boast a large amount of hard barrier and are armed with a multi-barreled rocket launcher and a flamethrower, just like their TNC cousins. They are commonly seen guarding the insides of Brother gates and major locations in Paris such as the Siegturm but they are still a relatively uncommon unit.

The only major difference between 1961 Zitadelles and 1981 Zitadelles is that high-tier Zitadelles (at least tier V) will come armed with a dieselhammer-like weapon rather than a flamethrower. This weapon is extremely precise, has a sizeable AoE and a decent rate of fire, so sticking to cover is even more important than before. Even if a player is not high-levelled enough to encounter one of these upgraded Zitadelles in the open world, a version that corresponds to a player's level set will always spawn in the Siegturm fight before Lab X is infiltrated. This specific Zitadelle, the only major high-tier enemy in the game that a lower-level player can stand a chance against, will be encountered after a gate is triggered, where it will trudge out to either scout the perimeter (stealth) or assist the already massive plagues of soldiers that will be compromising your armor (chaotic). All other tier V Zitadelles will act the same way as the special one in the Siegturm. Tier V Zitadelles will also keep their rocket launchers. 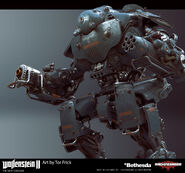 High poly model of the Zitadelle.

BJ battles the Zitadelle, Schockhammer Shotguns against Flamethrower and Missiles.

B.J throwing a tesla grenade on Zitadelle and Ubersoldat.

A Zitadelle on Venus.

The Second Zitadelle in Area 52, guarding the Übercommander.

A Zitadelle in Wolfenstein: Cyberpilot.

A Zitadelle in Wolfenstein: Youngblood. 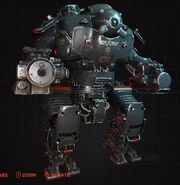 A Zitadelle doing it's animation for self-destruction.