Deceased: Died in an Extermination Camp

"You are strong, Billy. We are survivors you and I. We keep fighting even when we do not know how. You cannot help but be my son. {...} We will be together, soon. You just have one more hardship to go through."
―Zofia to B.J. in his hallucination before his execution.[src]

"Just remember my boy. It will end better than it began."
―Zofia comforting her son in his youth.[src]

Zofia met a young and beautiful man at a Polish American society gathering on August 1, 1908. Zofia's mother told her his name was Rip Blazkowicz, a man who immigrated with his father from Poland in 1889. In addition, Zofia's mother warned her to stay away from Rip, as his family were poor and had a bad reputation. Dismissing her mother's warning, Zofia made an excuse to talk to him, becoming smitten after he made her laugh from a monkey joke. She met him again at Uncle Anatols on Sunday, being unable to get sleep until then.

Zofia married Rip Blazkowicz and moved to Mesquite, Texas around 1908 and had a son named William J. Blazkowicz in early March of 1911. Zofia was a housewife while Rip worked at his business, which failed since he married her for her father's investment capital. Rip would take his frustration out on Zofia, William and their dog Bessie. Zofia would protect William from him, teaching him compassion while Rip wasn't home. During one of her husband's business trips to Dallas, she comforted BJ by cooking him soup and showing him her engagement ring as an heirloom.

In 1919-1920, Zofia was still under Rip's cruelty, leading one day for the latter to find B.J. liking a american girl named Billie. Zofia hid William and Bessie in the closet, with Rip and Zofia having a heated argument that he didn't know any better. Rip slapped her unconscious while William fought his father, throwing vases until he strangled him unconscious.

Once William was at a right age, he ran away from home and joined the United States Army to escape his abusive life, leaving Zofia heartbroken and alone with her husband. After Nazi Germany defeated and occupied the United States, Rip, along with other like-minded neighbors, exposed Zofia's Jewish heritage alongside African-Americans, homosexuals and other minorities to the Nazis. Zofia was sent to New Mexico's extermination camp and killed, unknown to William.

Events of The New Colossus[]

Despite her death, B.J. took her compassion with him, seeing her as Heaven personified. B.J. cared for his friends and allies despite the horrors of war, not looking at their ethnicity and entitlement. B.J. returned to his home after destroying Area 52 in Roswell, New Mexico to collect Zofia's engagement ring to give to Anya. Upon learning that Rip had exposed Zofia, his friends, americans and other minorities, B.J. killed his father to avenge them before being captured by Irene Engel.

B.J. had a hallucination/dream of his mother after hallucinating a battle in the courtroom, who told him that he had one more hardship to overcome. On the planet Venus, Lady Helene and Adolf Hitler speak of B.J's past (who is there disguised as Jules Redfield), confirming that Zofia died in an extermination camp in New Mexico. After killing Engel on the Jimmy Carver Show in California, B.J. collected the heirloom off Irene's finger and proposed to Anya, who accepted, starting the Second American Revolution.

B.J. was assigned by Grace Walker to take down Übercommander's across America to seize anyone takes Engel's place. In Mesquite, the Nazis had rebuilt the Blazkowicz family home and made it a ground site to produce their movie on B.J. There, B.J. found Zofia's diary where she told the event of meeting Rip in 1908.

B.J. and Anya would bear twin daughters, Jessica and Sophia Blazkowicz, the latter was probably named this to honor Zofia.

Zofia was a loving, caring, gentle and a compassionate woman, despite her abusive relationship with her husband. When it came to her son B.J., she showed him love and kindness, protecting him from his father's cruelty. While initially struggling to stand up to her husband, Zofia was strong enough to call Rip out for his failures and even attempted to protect a young B.J. Her love and compassion was passed onto B.J., who showed this to anyone who was an ally or victim of abuse, an example is Sigrun Engel, a young girl who was abused by her mother, Irene. 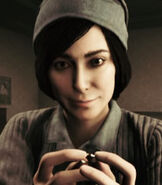 Zofa getting the ring from the case.

Zofia being yelled at by Rip, protecting William.

Zofia with B.J. in his day dream.

Zofia comforting B.J. before his execution.

Zofia's diary at the re-built estate.